Hi
I am using dynamo to generate some patterns for alias, patterns like seen on grills, tires, and other automotive stuffs.
Dynamo is robust and capable, but it always make very heavy surfaces that is not usable in alias or any other CAD softwares. even solids generated from primitive curves are always heavy.
I think that dynamo uses sort of complicated algorithms in comparison to those of specialized CAD softwares,
Is there any methods to control surfaces degrees and make practical integration between alias and dynamo??? 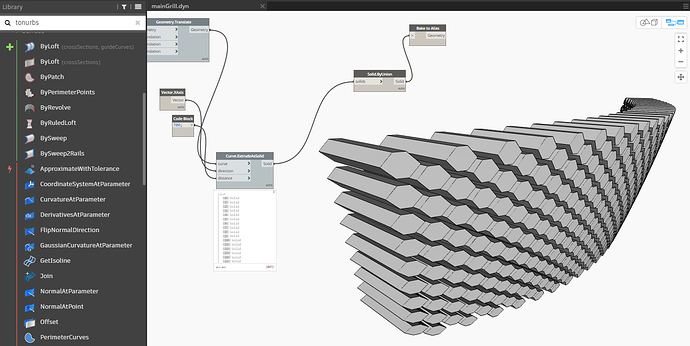 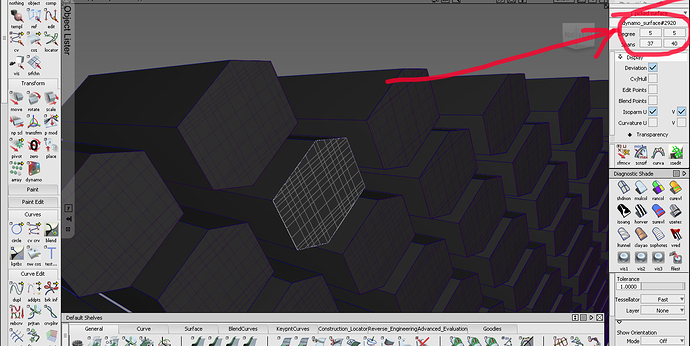 Hi @maxy_13,
We’ve heard this issue from others as well. There is a big difference between how Dynamo does geometry operations by default and how Alias does. One possible way of addressing this is to expose a few tools from Alias into Dynamo. We’d be interested to hear which tools would be most useful to you in Dynamo. For example, would it be useful to have a ‘rebuild surface’ node with explicit degree and span control?

In the meantime, one thing you might want to try is the Surface.ApproximateWithTolerance node before sending the surfaces back into Alias. Try very large tolerances to see if it simplifies your surfaces at all.

Hi tomfinnigan:
I’ve noticed that dynamo export heavy surfaces to alias, even if it shows low degree on dynamo. Then i realized that the problem is with spans, not degree. I believe that dynamo can’t generate bezier surfaces, rather it doesn’t give feedback about number of spans generated within the surface.
even the existing tool “surface.approximationWithTolerance” doesn’t recognize the spans at all.
I suggest a tool, similar to alias “rebuild surface” and “rebuild curve” tools, with options for controlling spans and degree as well.

Add to previous; I have double checked that following tools always unexpectedly generate multi-span geometries from original single span - degree 2 - planar ones. (I’ve checked using alias, as i mentioned above, there is no such tool in dynamo allows you to inspect geometries’s spans!!!)

I emphasis that the original inputs used to generate such geometries were planar single span- degree 2 polycurve/ polysurface.
I think that indicate that the algorithms of those tools itself is buggy, for some reason dynamo lavish alot of not needed spans (but it preserve the degree!!!)

I think a rebuild node would be a good idea. It seems very useful if you need control over the number of spans in the output.

This next bit is a bit technical, but I thought I’d add it if you wanted to know why there’s such a big difference.

One of the biggest differences between how Alias works and how the default Dynamo geometry nodes work is that Alias always uses nurbs, while Dynamo sometimes uses other surface types in an intermediate step, and then approximates those with nurbs at the end.

The advantage of always using nurbs like Alias is that it can give explicit control about nurbs and spans, and Alias tools are generally written to keep the surfaces lightweight. On the other hand, other surface types are more robust, so Dynamo’s thicken and solid booleans are going to be more robust. Surprisingly, the exact offset of a nurbs surface isn’t a nurbs surface - you can approximate it with nurbs, which is what Alias does, but if you want really robust thicken, using the exact offset is better.

While we want to expose more Alias tools to Dynamo, I think a good initial step is to have a rebuild node that can give you more explicit control. Thanks for the feedback, I’ve put it on our list.

Well said, that demonstration clears the frustration.
I have some more suggestions; what about a node that enable to select item(s) from lists visually, i mean directly from the object. I bet Alias users will more deal with specific edges that may arise from other tools, which i think, will be less systemic to select it easily from conventional list tools.
Another sets of evaluation nodes will be handy, like measuring curvature, deviation among objects. And that again put a need to “tolerance” setting in dynamo to control the matching operations (as construction option in Alias).

I don’t know the technical feasibility of such tools, so i will be happy to hear from you about it.

Some more suggestions just popped up my mind, so please bear with me

We need more view controls in dynamo, like 4 view , orthographic views, control degree of perspective (perhaps sort of basic camera settings)…etc
I know it is just a parametric software more or less, but very basic view options would make everyone happier…

We need more view controls in dynamo, like 4 view , orthographic views, control degree of perspective (perhaps sort of basic camera settings)…etc
I know it is just a parametric software more or less, but very basic view options would make everyone happier…

I suggest you post this to the Dynamo GitHub as it’s more overarching, where as the other requests are alias direct (and you’ve got contact with the Alias team already in this thread).