I’m trying to use Dynamo to populate shared/project parameters I’m using for spooling conduit runs. Here’s what I have that seems to almost work. 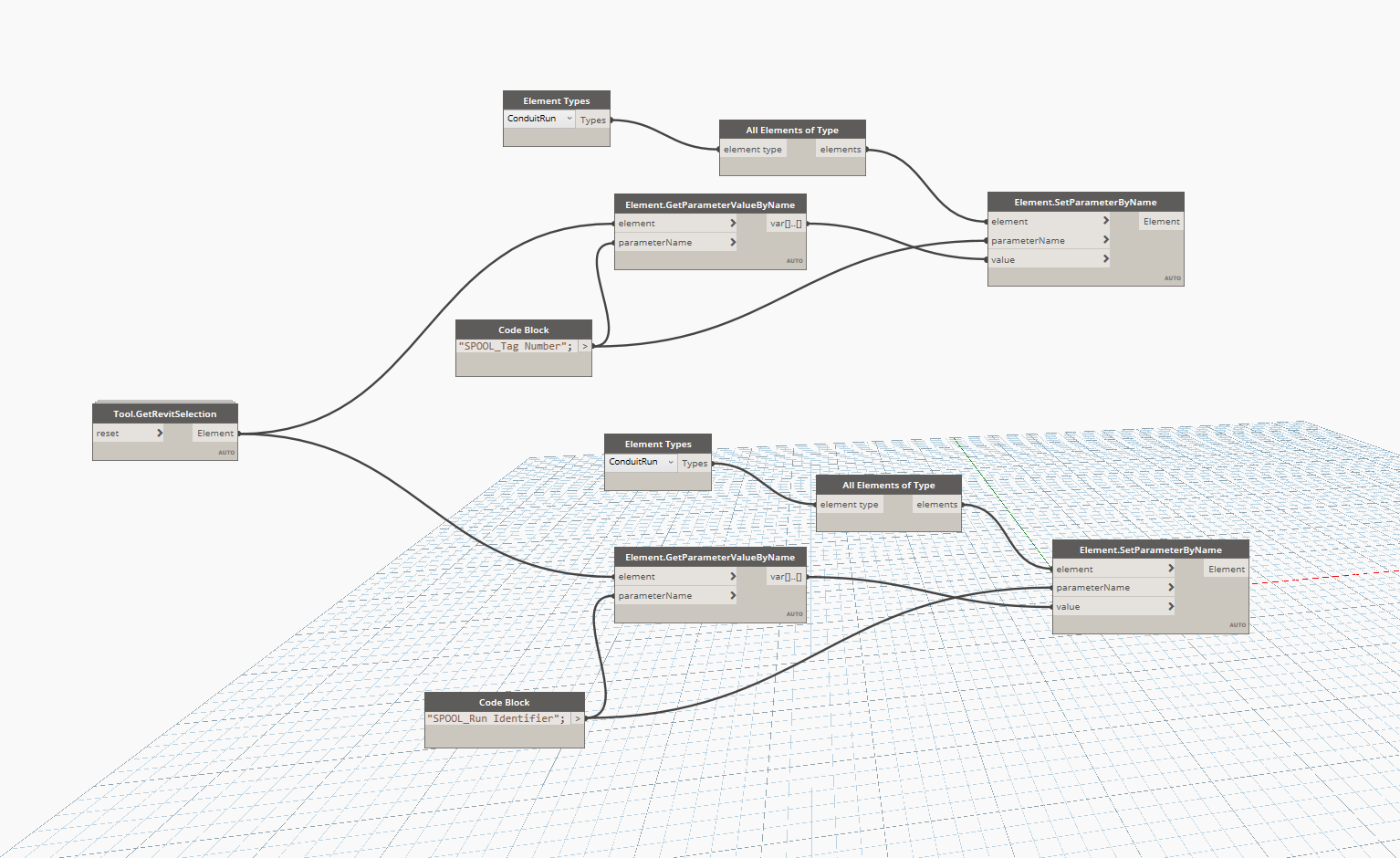 It seems to populate the conduit run schedule parameters, but the length and comments are being grabbed from a different run of conduit than my two shared parameters.

I’m a new user so I can only post one image at a time. I’ll include a few more below

EDIT:
This appears to be a similar issue to this thread:

I have a shared parameter for Conduits, Conduit Fittings, and Conduit Run. Is there a way to get it to have Dynamo copy the Value from Conduit and apply it to Conduit Run. I’m new to Dynamo and I’m just fumbling around any focus on the path I should take would help.

However it doesn’t appear to ever have been actually solved. The final post shows copying the comments parameter to the shared parameter which isn’t quite what I’m aiming for.

Here’s the Identity Data for my selection 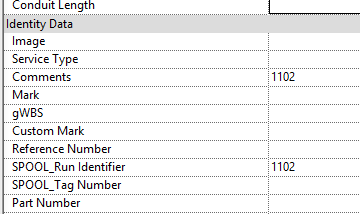 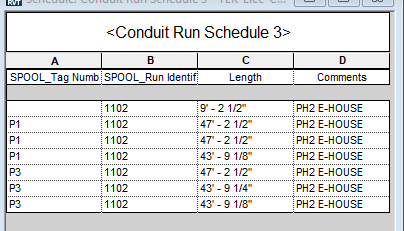 If you run the graph, does it give an error?
What does it say?
It will give us a clue

Do you mean running the Dynamo script? If so, everything runs without errors. I can even get my two “SPOOL” parameters to update in the schedule, but they’re showing next to the wrong conduit runs.

If I highlight, let’s say row two, in my schedule an click highlight in model, it highlights a different conduit run, which doesn’t have those two parameters filled out in the properties window.

Is it possible Dynamo is taking my selected elements, and applying those parameter values to the top of the conduit runs list, so to speak? Instead of matching up those elements to their respective conduit run.
I’m not sure if that made sense. Let me know if I need to clarify.

Here’s our original bit of script, slightly modified from a post from that other thread.

I think it follows the method you’re recommending…

However our Revit model is quite large, and this script takes upwards of 40 minutes to run. Which I why I tried to change to a user selection.

Is it possible to use something like this to get the ID’s of the respective conduit runs based off the selected elements and apply the parameter values accordingly?

i can see why it is taking too long now,
you are getting the parameter value and setting it back to the same object

What I find interesting, is this script didn’t appear to have this issue yesterday. I ran it a few times, and it did take some time, maybe around five minutes or so. However, today I had to force close Revit after about 40 minutes of the script trying to run.

way better than any dynamo method is to take you schedule and use sorting and grouping, don’t forget to untick the itemize all button after sorting, and fill in the empty cells.

Then read the Dynamo Primer, we all did

Unfortunately, that’s the problem.
The only parameter that links between a Conduit Run and it’s children is the comments, which we don’t want to use for this purpose. So when creating the schedule, those values appear blank even if the individual elements have them filled out.

Hence the purpose of this dynamo script.

Been trying to find time to read the primer, as I’m admittedly not well versed in Dynamo. Unfortunately I’m in a bit of a time crunch with this project.

i’m sure someone else here can help you better, i’m sorry, and you have been very polite

No problem. I appreciate the effort!

I ran it a few times, and it did take some time, maybe around five minutes or so. However, today I had to force close Revit after about 40 minutes of the script trying to run.

Sounds like an element binding issue… post a Revit model and the dyn here it to another file sharing service and I will look into that. If I’m right I’ll return with instructions on how to fix it and will take the time to explain what it is and why it happens.

Was this ever solved? I an trying to do something similar and decided to search rather than make another post with the same question.

We ended up moving to a new solution so I never circled back to this, but may be able to help you out. Are you trying to select a conduit and push a parameter from that object back to the conduit run it belongs to?

I am new to Dynamo and my goal is to get the conduit run schedule to populate other parameters other than the default which is just comments.

I don’t recall ever seeing JacobSmall’s message, so I never did end up looking further into element binding. So perhaps there is a better way than what I’m about to send, but I’ve attached a Dynamo script that should work for you.

It doesn’t monitor for changes or anything like that. So if you make a change after the initial run you’ll have to re-run this script. Also I threw this together in probably about 30 minutes, so there’s no error checking but it should work.

Input the names of the parameters you want to copy in the “Comma Separated Parameters” input - don’t put spaces between the parameters, just commas. If there is a space in the parameter name that is fine, it will still work.
Then select 1 piece of conduit on each run, and hit the play button. It should push the values from the parameters you selected into their respective Conduit Runs.

I supposed I should put in another caveat - this script assumes that both the Conduit and the Conduit Run have the parameters you listed. If you need to add new ones you can do this through the Project Parameters menu in the Manage tab.

I am going to attempt to use this script but I still don’t fully understand the code as I am still learning python.
it still confusing to me… there is a script that I want to write for duplicating views multiple times but I got stuck on the filtered element collector (Document) constructor. there is alot of document classes in the api i dont know which to use.