Originally created object disappears when i rerun the script

When 3Dsolid are created from a script they appear just fine, but when the script is rerun the originally created 3Dsolid disappear. Is there a way i can fix this?

This behavior is a result of element bindings. From @Paolo_Emilio_Serra1’s AU 2019 class:

When the Dynamo application is visible and the graph creates objects in the DWG, the trace of the Dynamo owned objects can be serialized in the Dynamo file itself. For each node that creates objects from Dynamo into the DWG, Dynamo stores their “fingerprints” in the Bindings section of the Dynamo JSON structure, so that if the inputs change, Dynamo can confidently update only the objects that are owned by the graph accordingly.

I believe that this was changed with Dynamo for Civil 3D Update 2, where the bindings are now serialized in the DWG itself (see release notes below).

All that being said, you can try running the script with Dynamo Player. I think this is a “fire-and-forget” method, meaning that new solids will be created instead of updating old ones. If you don’t have Dynamo Player yet, you can click the “Run Script” button in the Manage tab to accomplish the same thing.

Here are some more resources about element bindings:

Element binding is the name given to the process which Dynamo manage to ‘track’ the items created in non-Dynamo files. In this case, I’m going to focus entirely on element binding as it refers to Dynamo for Revit, but the mechanism exists to allow for this behavior in other applications (advanced steel, fusion, alias, etc.) as well. In the context of Revit, ‘elements’ refers to anything with an Element ID in the Revit database. When utilized correctly, element binding will expand how you leverag…

Is it possible to disconnect objects after “baking” into Civil 3D. I have tried moving them, changing their layer and even closing and opening the Dynamo Script between running the code and the ObjectByGeometry etc still finds the shapes/ curves etc and deletes them and matches what is not previewed in the Dynamo viewport. I did just get it to leave one set when i moved and change the layer on 2 sets of solid but it seemed like it picked which ones to deleted/replace. I can understand the thin…

When i use the Dynamo Player the same thing happens.

Can you try running it on a different DWG?

Element binding in Dynamo for Civil is now an odd duck. Anything which applied to the same concept in Revit is not the case in Civil 3D, as there are a bunch of issues on that front.

In Revit, bindings would serialize the Globally Unique Identifier of the element which is created. THis means that that ID will be unique to that element. If you open another file (unless it was a copy of the first file) the GUID will not match in any way. Therefore bindings can work with specific elements, no matter what.

In Civil 3D that is not the case, as there is no GUID and Object ID is consistent. So serializing into the file doesn’t work by itself (earlier Dynamo for Civil 3D did this, and objects could be ‘swapped out’ unknowningly as a result - see the ‘known issues’ page of the first release for more info - http://help.autodesk.com/view/CIV3D/2020/ENU/?guid=Civil3D_ReleaseNotes_2020_Release_Notes_Dynamo_2020_known_issues_Dynamo_html). To prevent this, there is now also element binding data saved into the DWG (see the release notes for Dynamo for Civil 3D 2020.2 - https://help.autodesk.com/view/CIV3D/2020/ENU/?guid=GUID-D26CD864-19EF-40A7-9D59-66D01C505968). As a result of this change, Dynamo Player will NOT circumvent bindings and alternative methods will need to be found.

Trying another DWG and coming back to this one would maintain the binding (to some extent anyway). Likely a new dyn (save as) would be a requirement to avoid them. Unfortunately this is a low priority for me as the customers I support design buildings and primarily leverage Dynamo for Revit with some sandbox mixed in.

Dynamo is a great and powerful tool but it has two major design flaws: geometry scaling and persistent element binding. I think this will people hold back from using Dynamo, especcially because of the latter.

Persistent element binding however is a really, really bad designed feature. It is an unpleasant surprise for users when somewhere in the drawing geometry will disappear when you perform a task on another alignment or surface or corridor. Users need scripts that can run on other objects in the drawing as well. How would we react if AutoCAD removes the just drawn polyline if you draw a second one? That is wat persistent element binding does. So I really hope the designers will remove this feature and keep it session based.

Meanwhile I am glad the element binding data is saved in the NOD of the drawing (and not in the script anymore) so it is easy to remove it with just one line of Lisp:

Dynamo does not use this data during the session, it only saves it after running the script, so it will not help deleting the data while Dynamo is open. It only works when Dynamo is closed and reopened. The workflow is this:

Another one, even better (@GvdB: this is your solution):

Now you can design your script so that you can select a single object, run the script and do that process on another single object without accidentally deleting the generated geometry.

I have included the LISP in the Dynamo script and that fixes the problem! Thanks a lot.

Cool! Even better! Can you show how you added the lisp to your script? Is it done with Python?

I didn’t examine such a thing because I was convinced Dynamo saves the data when the complete script has finished, so deleting it while in the running process probably does not help.

I have used a custom node from Clockwork to wait for the script to finnish.

The python script i have used is to send a command in autocad. The command can be used to run the LISP. 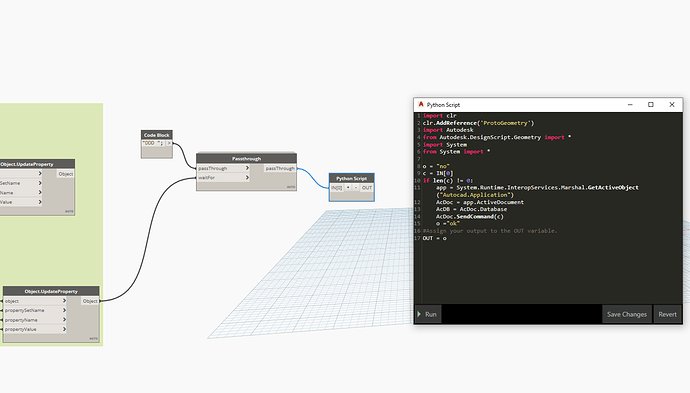 Now you have first loaded a Lisp routine in the drawing with the name DDD, but instead of an external Lisp you also can pass the Lisp line mentioned above. You need to escape the quotation marks in a Code Block or use the String Node.

Then you are fully independend of external lisp files.

Maybe you need to use the (vl-load-com) call for that function, but Lisp is easy. Pass this as a Command Line call instead with a String Node:

To make it even better, you can create a Custom Node of this

Thanks for your feedback, bindings are a major area of investigation and under review inside Dynamo for Civil 3D. How and when they are sorted very much depends on the use case. Scrips can be used for a lot of workflows, for some like the video above it probably makes scene not to sore any bindings (either in the script file or the dwg) for others bindings are extremely useful.

You agree that there are user cases where binding is absolutely not useful. But Dynamo does not provide a solution for such situations.

I can’t think of any case where persistent element binding is necessary in a Civil 3D project, so I wouldn’t mind if this feature becomes session based, as it was in the beginning. But if not, make it at least optional (per script or as user preference). Then you serve both situations.

Thank you for this. We ended up adding a button to our custom ribbon to run this. Then the user has the option of when/if they want the bindings purged. It’s too bad this is all or nothing per dwg at this point. There needs to be a way to keep bindings for some scripts, but not others.

I’ll take a stab at this using a real example from when I was still practicing, but we didn’t have Dynamo at the time.

Imagine a graph for placement of a pair of polygons sent by the building architect for building outline and an associated driveway into a wooded site. Every tree within 30’ of the building and 5’ of the drive needs to be demolished, all other trees can stay as they are, but for each demolished tree a new one is to be planted using a somewhat randomized logic routine in the graph.

You then layout the utility connections, dimensions and all the rest of the work by hand as usual, including annotations and the like. Three weeks after your DD set goes out the architect has a new layout which effectively requires a complete rework of the design - the changes are minor from an architectural perspective - the building rotates and has some fairly minor massing adjustments, but it’s quite complex from your standpoint. Some amount of trees marked for demo will now need to not to be, some other amount will need to be, and most importantly all your new trees will also need to be recalculated and redistributed about the site.

If you have persistent binding you can run the same graph with confidence the counts will be correct, and you can concentrate on finishing the other outstanding work from this change and general development of your work.

If you don’t have binding you get to spend some time doing the work by hand, or ‘resetting’ your data set to be in line with where you were before the prior graph was used so you can truly ‘start from scratch’.

All that said if you are ‘automating a simpler but tedious task’ in small sections of a design, there is admittedly less value here.

Thanks Jacob for the example. So it might be handy to have persistent binding, in some cases.

But there is no solution for all the other workflows were persistent binding is absolutely unuseful. I hope the binding will become optional as soon as possible.

I hope the binding will become optional as soon as possible.

Count my vote for being able to turn off binding. Perhaps it just needs to be a new node that we can chose to include in our script so my end users don’t have to change settings between running different scripts. It looks like people here have already done a good chunk of the development for the dynamo devs.

In my case - I have a script that generates a coordinate grid with labels for plan drawings in civil3D, from a polygon representing a viewport. Some drawings have more than one viewport that needs to be gridded. Run it for a second grid - and you lose the first grid. Sigh.

I create the features on separate layers for each viewport. The binding is so strong that if you lock the layers holding the results of the first run, a new run of the script will fail despite the script not being told (by me) to use anything on the locked layers.

The binding is so strong that if you lock the layers holding the results of the first run, a new run of the script will fail despite the script not being told (by me) to use anything on the locked layers.

Likely the best solution will be a ‘copy created elements’ method which circumvents the bindings. Such a method via the Revit methodology is quite simple (see my AU course in element binding for Revit), but I am not familiar with the Civil3D API so how such could be similarly achieved isn’t clear.

Yes, for the script I’m working on, it could be run by copying the starter polygon into a blank file, then copy results into production drawing. Repeat in a new blank drawing for another viewport. But it’s extra steps my users shouldn’t have to do.