I am trying to create a dynamo script to map a filled region over a floor that follows a topography. The idea is to have the filled region have the actual floor pattern rather than have it map the tessellations of the surface. I still can’t seem to get it to work.

any ideas will help 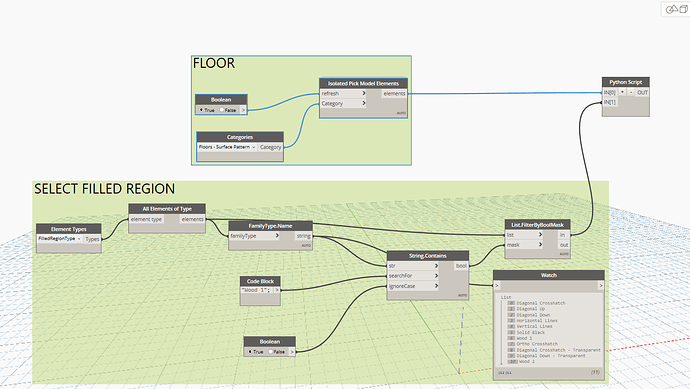 Ah what I’m trying to do is add that filled region in a site plan view so the filled region would be view specific that would follow the outline. It would be for drafting and documentation rather than 3d view.

Also to add a little more clarification, I was attempting to adapt the filled region dynamo script that followed room plans, and have that simply overlay on plan views. I saw an AU seminar where it was done

so you would need the geometry of the tesselated surface and extract only the x and y coordinates of the vertices is that right?
maybe something like this helps a bit:

How to get triangular meshing on polygonal surfaces Packages

I’m trying to find a way to divide an array of polygonal surfaces into smaller <span style=“text-decoration: underline;”>triangular</span> surfaces. The problems I faced with at the moment: Using the Lunchbox Triangle Grid by Face and adapting the python a bit so it can handle a list of surfaces, creates the triangles in the “bounding” surface. So if the input face is a big triangle, the resulted triangles form a square surface contour. This could be solved by the Geometry.Intersect, but the…

Hey, So I thought I’d 3D print John’s birthday cake… [image] Unfortunately when converted to mesh, it becomes more like this… [image] There are various methods of controlling this described… But changing them gives no visible difference… [image] I definitely read that the render precision of Dynamo affects the export, but the Primer is being rewritten right now?.. [image] This works, but is looking quite heavy… Would anyone have any other ideas? Thanks, Mark Happy Birthd…