Controlling the z-axis in a script

I’m trying to understand how to control the z—axis offset in the above script. So far I’ve tried 1) adding a constant z coordinate 2) adding a non-zero z point to the list after generating my curves and finally 3) setting the parameter of the structural framing element. However, each fails: 1) breaks the transpose function because of a different list structure 2) no idea how to do that and 3) Revit assigns the framing element to the higher level but offsets it to level 1 again for some reason. I know I can re-offset it back up, that’s my plan B, but I’m hoping there is a method which will give greater control eariler in the script. Are there any clever ways to control the z-axis? The next step is adding columns but without z-axis control that will get messy and complicated to control.

Have you tried the “Geometry.Translate” node? (a.k.a. Move in Revit) 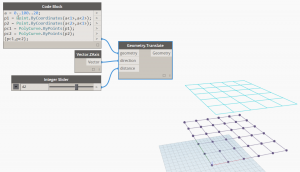 Good grief. How is a beginner at Dynamo ever suppose to know that?!? Thank you very much. I’m going to try this at lunch.