Hello friends,
I would like to ask for your help. I’m willing to export collected data from Dynamo to Excel. I use Revit 2015, Dynamo 8.0.1. I’m a little bit confused because my procedure doesn’t export anything. In one case I use standard Dynamo node and in the other I use Bumblebee node. In both cases I have literally no information on output. Can you help me please? I’m struggling with this problem from two days. Thanks in advance. 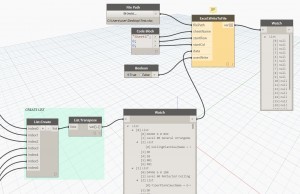 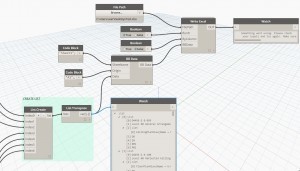 I downgraded Dynamo to 0.8.0, I wrote new script (I tried to keep it very simple). Bumblebee node has exactly this same problem as before. With pure Dynamo node I also have no luck. The error occurs: HRESULT: 0x800A03EC.

Can someone please help me? I don’t know what is wrong… 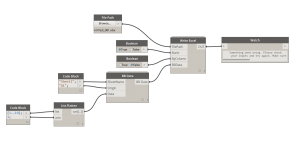 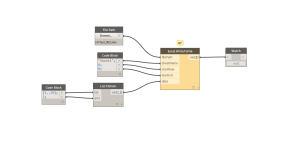 I can’t see enough of your graph to pinpoint the issue, but I do see two potential problems.

If you are going to use Bumblebee, be sure and read the primer on how to use it, it’s powerful but not as straightforward as the Excel.WriteToFile node is.

Please elaborate. I will do my best to make it as straight forward as the built in node is, while keeping its power in check.

I am more than excited to hear feedback from real users so all your comments - good and bad - are welcome.

No worries Konrad. Bumblebee is good as it is, i was just trying to give the Bumblebee Primer some free publicity… What I meant is that with Bumblebee there are more capabilites, but also more opportunities for user input error (like feeding in raw list data instead of BBdata, forgetting a bool, etc). So if a user simply downloads the package, doesn’t read the primer, and expects a single node like the default node, they may have a few problems down the road (Bumblebee comes with a user manual for a reason…).

Bumblebee seems to me to be a tool that is best used after a user has a good handle on the default node Excel write behavior and needs more…not the case here. The issue the OP was having seemed to me to be based not on the Excel writing capabilites of dynamo as much as it was an issue on their data formatting upstream.

In that case i will say please read this:

Just curious Konrad, but is there any way to write data into Excel that is not of the string/double/integer/date variety? So possibly writing Revit Element data in Dynamo Wrapping direct to Excel then reading it back later rather than having to write ElementIDs or Guids to Excel, then re-translating them back to Elements once the data is roundtripped? I’m guessing that is beyond Excels capabilities, but then again…if anyone could it would be you. I guess i like the idea of doing that because people can mess up IDs and Guids in Excel accidentally, but if something were wrapped up in a class that couldn’t be edited in Excel, but just goes along for the roundtrip ride, then in theory it would be safer, no?

You can lock certain cells from being edited by users. I don’t think that you can write anything other than: Currency, DateTime, Logical, Number or Text object types to cells in Excel. Here’s what I am basing it on: