Set parameters to an element of a linked file

The problem is simple (I think so…). I want to set an added variable that I created in Dynamo with parameters from the Linked File and from Elements of the Linked File. The image bellow can help you to understand what I’m saying:

So, we have the parameter “Nome” in the link; “1.Bloco”, “2.Área”, “3.Apartamento”, “4.Int/Ext” and “99.Serviço” in the Elements of the Category Walls which are inside the Linked File. We added all of them and tried to set the final parameter back to the Walls of the Linked File with another parameter called “EAP”. The problem is exactly in the final step because apparently Dynamo can’t set parameters to an Element inside of a Linked File.

Is there anyway that we could solve this problem?

You would have to open the linked file.

Hi Einar, I tried your suggestion but for my part it didn’t work. The linked file was opened in the same revit session of the one i worked on. Do you have an other solution or a clue ?

here is an image to understand the problem https://we.tl/B4RS6YG8Wx
thank you in advance

Dynamo only points at one document which is the document on which you are currently in when opening up your script, also, linked files are read only as far as I’m aware, a workaround is to have two separate revit sessions open (the host model in one, the linked model in the other), you can then run the script on your host model which does the leg work and write the data to excel (or .csv or any data storage file), then a Dynamo script in the other model (your linked model opened in another revit session) listens to changes and reads the data file and writes changes to the linked model. This workflow may suit your purpose.

@Daniel_Woodcock1
Interesting idea…!! Thanks for sharing
"…then a Dynamo script in the other model (your linked model opened in another revit session) listens to changes and reads the data file and writes changes to the linked model…"

Does that mean the script in the other Revit session will run automatically? (something like Geometry Pipeline in Grasshopper). Can you please point to the Dynamo nodes that can help achieve this?

thank you for your answer i will try the suggestion

Yeah, pretty much how I would use GH too by streaming out data and listening on another line. You can have this automatic if you want as the built-in in file nodes watch for changes, where with GH I had to listen for changes with a filewatcher class. 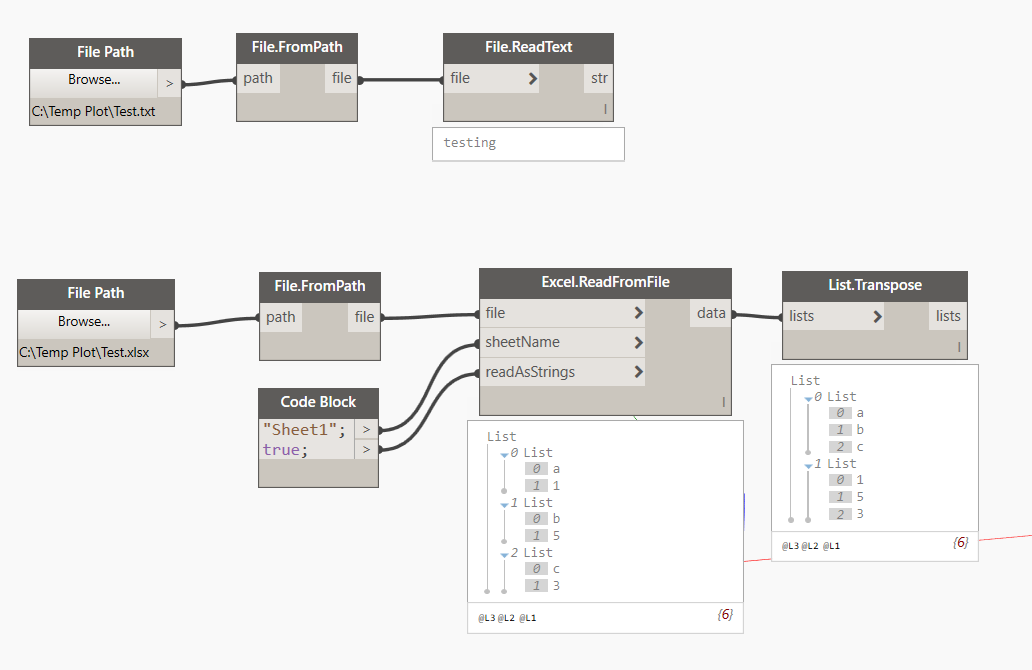 The above script is just pointing to a txt/xlsx file (automatic mode on) and if i change this txt/xlsx file it will update it’s value automatically. So, if you were writing from one script, you could pick this up in another script almost instantly.

I do this all the time when streaming GH data to Dynamo. if you really wanted you could build some lines in one script, send out their endpoints and rebuild in another, then use the first script to control the geometry, I’ve used this workflow to remote operate a Dynamo Script before.

Be careful though when using run automatic, I always find having a tiny bit of control important (I also remember running into issues with data mixup between syncs a while back with the above workflow on automatic), I prefer to hit run when I can, it only takes a second unless i am 100% sure there’s no possibility of errors.