Never seen this issue before, and apologies if it’s been covered but a search didn’t turn up anything.

I’m unable to select tags via any method which are hosted to a linked model, returning the error in the screenshot below. Any method I can think of (all elements of category, all elements of type, all elements in active view, select model elements, select model element, ID to selection, UI based element pick tools…) which results in selecting these tags causes either a null result, skips the tag, or returns the error in the screenshot below. Has anyone seen this before?

Try restarting your pc. Was it working before? Did you install any custom addins/packages.

Works on everything EXCEPT the darn tags associated to the link. I’m restarting now.

I’m seeing the same thing and it is also causing the collector by category to fail EDIT: I meant to specify that it causes this to fail, even when I also tagged ducts in the current document, so the collector isn’t skipping over the tags associated with linked elements and still retrieving the tags associated with elements in current document, which I would have expected… 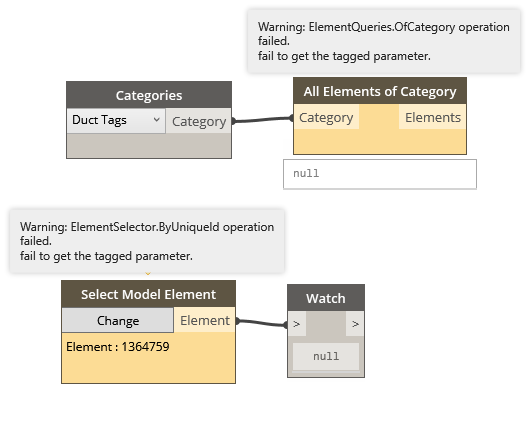 Yeah still fails for me as well. Going to try on another simplist model to see if it is something related to the consultant model but I assume that’s not the case since @awilliams has the same issue.

I found this topic (but i’m not sure if it is what you are looking for).
https://forum.dynamobim.com/t/door-tags-get-mark-value-from-linked-model/4691/2

something related to the consultant model

When I posted above, I had 2016 and 2018 open with two separate projects with links from different consultants, both had the same results…

@MJB-online I just had a look at that posts’ solution; the Python script requires the tag elements as inputs, and it seems neither @JacobSmall and I are able to select or collect tags associated with linked elements. But given that that workflow was a solution, selecting/collecting tags associated with linked elements shouldn’t be a problem or at least wasn’t in the past…

I can’t remember if this has ever been an issue on my computer before, nor when I last tried, so can’t think of any new packages or updates that might be causing this. Maybe others will chime in and test out if they are experiencing the same issue.

This certainly was possible in the past (as @MJB-online pointed out), so it may be a package or a Dynamo/Revit version issue so I’m attaching data relative to what I am running. If nothing else turns up I’ll post to the github tomorrow (heading home now to lock down the candy supplies before the trick or treaters raid it all). 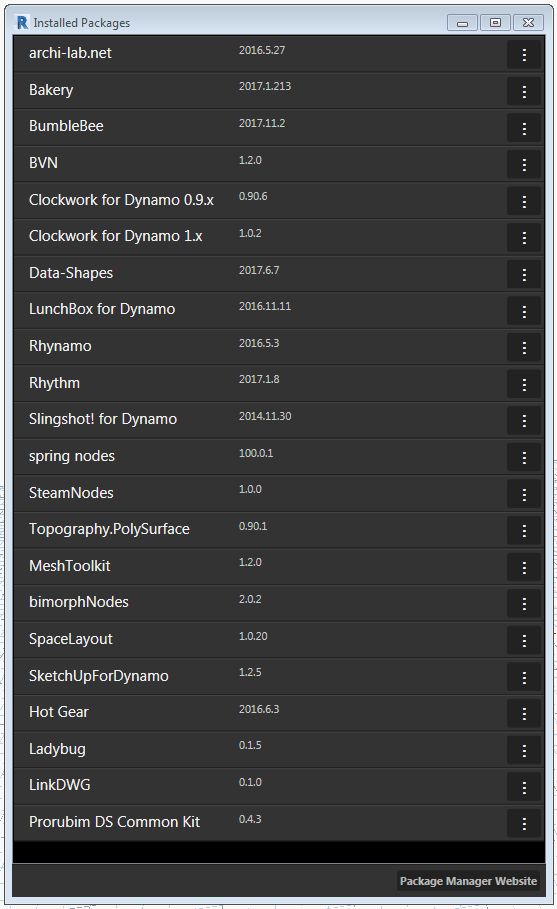 I can see this issue as well as soon as linked walls get tagged. I have been able to select those tags with a right clic (to select all instances in the view) and then by using Get Revit Selection from Hot Gear, which consists basically in this script:

I’m pretty sure this used to work. At least I had it working with keynote tags a while back.
Having the same issue with linked tags now though.

I’m pretty sure this used to work. At least I had it working with keynote tags a while back.

Having the same issue with linked tags now though.

It did, but clearly doesn’t now. I’m off to the Github to create a bug (assuming I can find the time before I leave).

EDIT: Ok clearly it’s easier to do stuff while everyone else is out to lunch. Github issue is here for anyone who wants to follow along.

Posted to the dynamo forum and multiple other users confirmed the issue exists f…or them as well. See post here: //forum.dynamobim.com/t/selecting-tags-associated-to-a-linked-model/16118 ## Dynamo version 1.2.1 ## Revit version 2017.2 ## Operating system Windows 7 ## What did you do? Attempted multiple methods to select tags associated with elements in a linked model. All elements of category, all elements of type, elements in view, select model element, select model elements, IDs to element, and multiple UI selection methods from various packages were tried. ## What did you expect to see? Selected Revit elements for use in dynamo environment. ## What did you see instead? Error messages or 'null' in all cases. See attached screenshot of error and screenshot of packages installed (incase it's package related as the forum thought that may be part of the cause). ![capture](https://user-images.githubusercontent.com/29869395/32339414-17fd7170-bfce-11e7-8e85-86ece78a2fa4.PNG) ![capture2](https://user-images.githubusercontent.com/29869395/32339420-1bc092ba-bfce-11e7-8a41-f56b42698e5b.PNG)

Sorry for resurrecting this thread, I’m also having problem with this.
anyone found a solution yet?

Upgrade everything and try a newer version of the springs package.

Hi! having same problem with revit 2020…any news?

You can use the SelectByCateOrType node as a workaround : 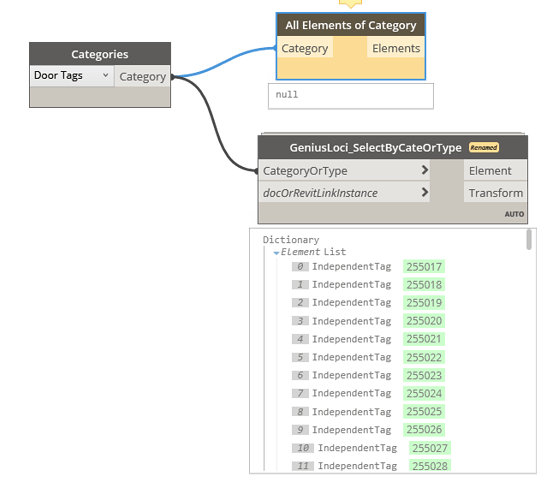