Pass Through to wait on points

First time I’ve used Passthrough, am I not understanding how it should be used? ViewSection works if I hard code the head & tail pionts, and _Pick Points behaves as expected when it’s alone in the graph, but when I try to pick the points for head and tail the dictionary is returning an empty list. So, it feels like it should be getting the 2 points first, but the whole graph is done running and it never asks for those inputs.
8.png) 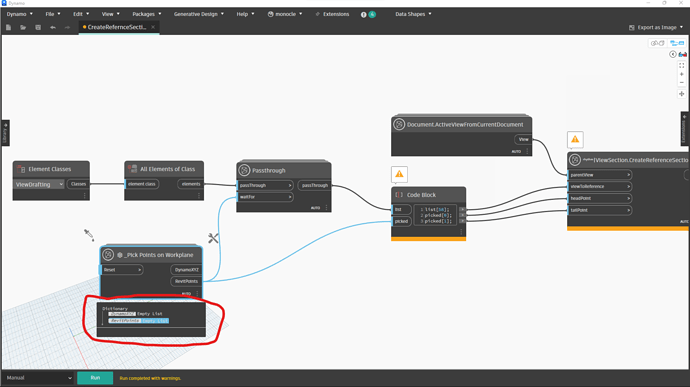 Are you closing between runs? You don’t have a toggle for the Pick Points reset so it’s only going to run once.

From the looks of it you’re dealing with a different issue (possibly the run issue I mentioned at the beginning). A passthrough node doesn’t seem necessary here. The ViewSection node requires head and tail point inputs that come from the Pick Points node anyway. It can’t run until those points exist.

@Nick_Boyts good catch, I thought the default was true,
but I’m still getting an empty list of points, but not until I add the View.Section... node

I thought the default was true

The Reset input is a toggle, not a selection. Switching between true and false “updates” the node and forces it to rerun. It doesn’t mean that you set the node to Reset = true and will automatically reset every time.

I’m still getting an empty list of points, but not until I add the View.Section... node

What do you mean by “not until I add the View.Section... node”? Are you adding the node after you’ve run Pick Points? Close out of the graph, open in Manual mode, and don’t run it until you have everything setup. If Pick Points isn’t returning points at any time then that’s one issue. If the points “disappear” at some point then it’s something else, possibly a transaction issue.

It was sketch plane,
not sure why that made a difference because I used it the same way in the same file before but either way, it’s working as expected now, thank you for your help understanding it. 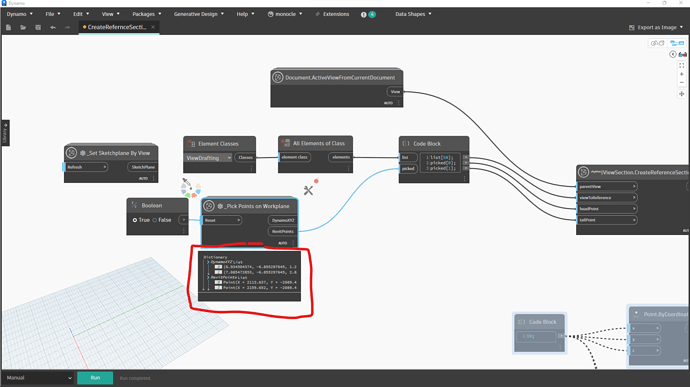