Hello guys,
is there any possibility to manage the order of Revit’s objects?
I mean, I have a problem with overlaying lines.
Commonly Revit displays elements like I would like them to be, but when it comes to printing, overlying lines are printed in different order then it is shown on the screen.
For example: My walls are bounded with black width line and furnishing objects are displayed with gray lines. When furnishing comes into contact with the wall it overlays wall bounding with its gray lines.
I could rework families with special line styles, or add a possibility to turn off visibility of individual lines, but it sounds like a lot of work.
So it seems to me that the easiest way would be option when walls’ lines layer is reordered with script and is projected on the top.
Is it even possible? 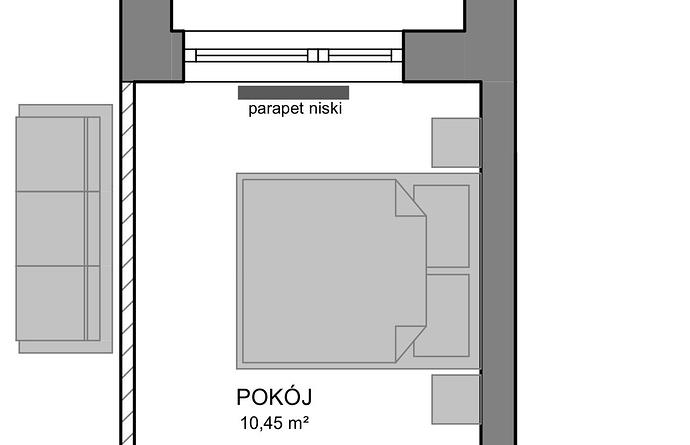 I’m going to stick my neck out…

No it’s not possible (ok someone will prove me wrong!)

But you could maybe get each wall and run an intersect check against furniture, then if you get a true, move it 25mm in the vector of the wall surface normal?

Apologies for not being much help,

My method was to always have a slight offset to my furniture if/when this is an issue, but 99% of the time it’s not when you put an actual cost on it. You could try layering a second version of the plan with a 0 unit depth (so all you see is the cut elements) over the top of your other plan.

Thanks for the help. Sorry for the late answer.
I think it would be better to upgrade families with proper lines

The thing is, that sometimes I have to make “apartment cards” for developers. And they have very restrictive standards of graphic used. So if i had to overlay 70+ plans of apartments with another 70+ plans without furnishing it would be really time consuming… And it always could slipp a little aside which would case an incorrect graphics and rejection of a card

In your example drawing your sofa is offset from the wall… why not the bed and bedside tables?

Otherwise you would need to embed a black symbolic line in your families? The grey symbolic line is always going to sit on top of the black wall line…

I agree. Unless you used Dynamo to do the overlay for you.

As I said. Our developers have restrictive standards.
What’s more when we are working on the project we usually put families next to the wall.
If I had to move aside all families it would take ages, or my PC would explode if done by Dynamo script

Well @JacobSmall it sounds like a plan. If I have some free time I will try to figure something out.

You might find this useful… careful of annotation though…

I’m back a few days later to update this post: My issue was the annotation crop. I changed the order my script worked to get things working. My order of operations before was: Duplicate views. Apply an “Existing Room Name Views” view template. Tag rooms and attempt to place views on sheets. This method didn’t work because when I applied the “Existing Room Name Views” view template, it was set to remove all existing detailing and only include existing rooms from the linked Architecture model.…

Edit: This fixes the annotation issue…