Anyone explain what the moose is going on here?

I’ve fed, “Base Offset” into the same nodes (renamed in some of them).
Using a list in a codeblock, just a codeblock and a string.
I’ve got different outputs!

Are there two parameters called, “Base Offset” maybe? 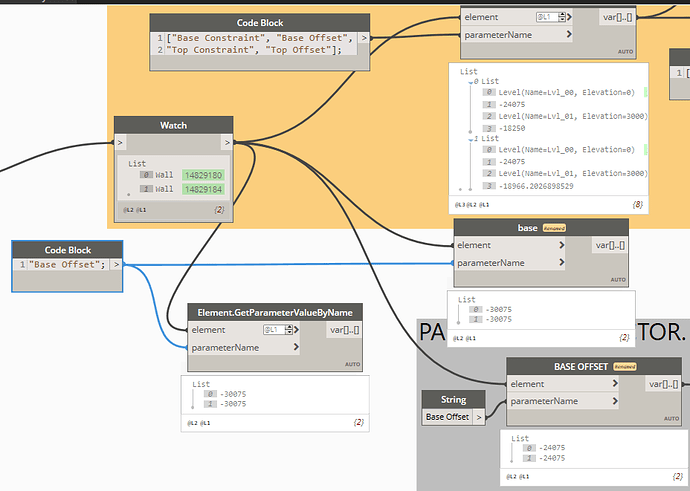 Not my script btw

I think what’s happening is it’s moving walls… Dynamo obviously does nodes in sequence not parallel and some are done AFTER the wall moves. Hence a different figure.
That’s my guess anyway.

Perhaps, but that’s a bit of an odd name to give a user created parameter.

Do you set that value somewhere else in the graph? Can you provide the DYN for others to have a look?

EDIT: Ahhh… you mean no one would be stupid enough to name a new parameter, “base offset”…

Well… you say that but…

“Base Offset” is an odd name for a user to name a parameter, specifically for walls as they’d already have such. Not saying it couldn’t happen, but it’s not one of the common duplicates I see (I used to see a “why do I have 32 ‘color’ parameters” case once a week when I took cases)

I think what’s happening is it’s moving walls… Dynamo obviously does nodes in sequence not parallel and some are done AFTER the wall moves.