Dynamo 2.02 For Revit Not working and unable to see/place nodes

Been working in dynamo for a little while now, but recently I am unable to do anything with my existing scripts or even create new scripts. I’m unable to place any nodes, and when I open an existing script all that is visible are the wires. I have no idea what’s going on. I’ve tried reinstalling, restarting, uninstalling and reinstalling all versions. I’m stuck, any ideas are much appreciated.

What Revit build are you using? 2019.2.1 is the most current and addresses a similar issue.

It could also be a conflicting add-in which needs an update. As one example, PyRevit recently updated to resolve similar issues.

I’ve been trying it on Revit 2017 & Revit 2018 with similar issues, I did recently try out a new Revit add-in called “Surfboard”, but I uninstalled it to see if that could be a potential issue, but still having problems.

I do have this in my issues list in Dynamo. 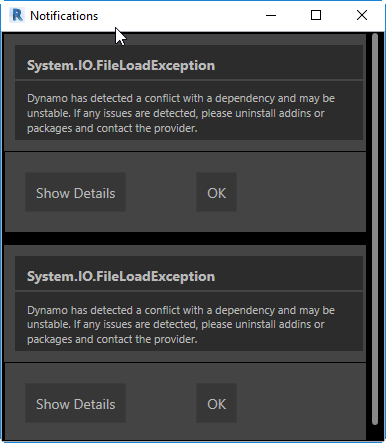 Sorry for the waste of time, looks like i found the solution. When clicking the show details button, it suggested that the LayoutFast add-in from Schneider Electric may be the problem. I uninstalled it and now everything seems to be working fine.