i’m trying to make it work the UI.MultipleIntupForm++ of the Data-Shapes package within the 1.3.4 version of Dynamo on Revit 2019.

I’ve tried to add the drop down and the list view inputs as explained on their website https://data-shapes.io/2016/12/13/ui-multipleinputform/
The window supposed to appear doesn’t pop up and the result of the node are all “null” values. I’ve tried several things like:

Im desperate, any help would be precious!

Thank you so much
Letizia

Try adding a List.Create to collect the values being used in the Inputs input.

Like this. All of the input need to feed the List.Create node. 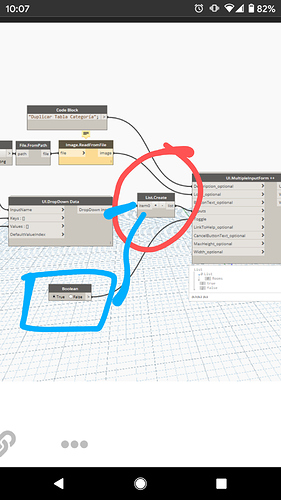 Thanks guys, I’ve tried but unfortunately it didn’t work… same problem. Any other idea?

Would you please post another image of your current graph with the previews expanded?

Also, are you getting the Drop-down / listview to popup, or not even that?

Here is the result when i add the node List.Create:

The result is the same: all “null” values as outputs and the pop-up window doesn’t show up…

Instead, the simple “UI.MultipleInputForm” of the same package works very well: 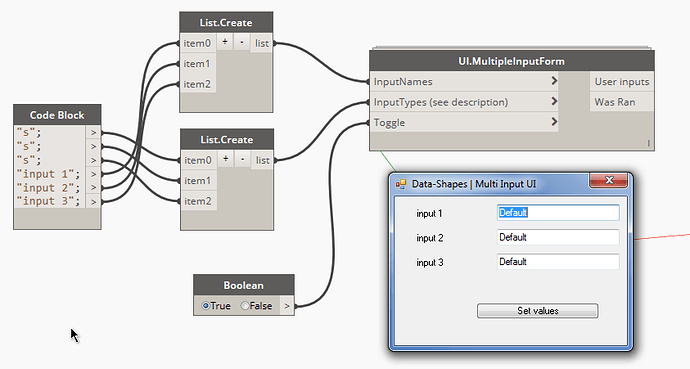 I don’t know what i am doing wrong

If you are running a 2017.4.120 version of DataShapes then that is most likely your cause. There has been literally 50 updates to the package since then and the current version is 2021.2.5. I’d try installing the current version and see if that doesn’t help. It should work on 1.3 and 2.0 I believe. 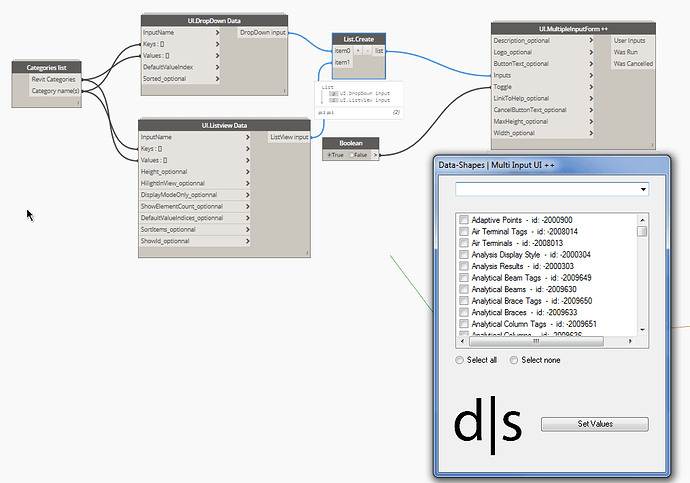 Thanks to all, guys!