Change all kinds of parameters from elements in groups?

Is there a way to set all Values (Object.Type) to Values can vary by group instance

is this even exposed to Revit API ? We use it in the context of PropertyWizard but it is cruzial for Dynamo scripts. So either we forbide creating groups in our project team (it would lead to burning cars) or we try to enter the group elements to change… 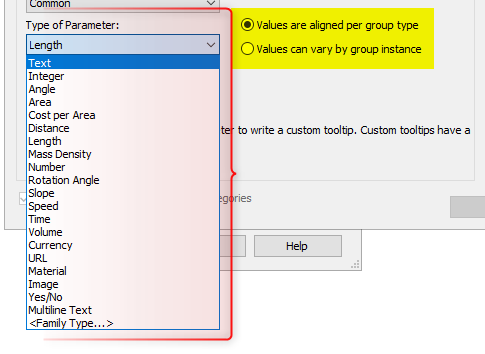 Changing parameter in elements which are part of a group Revit

Hi All, I’m dealing with an issue I didn’t realize before. I want to change element parameters in a selection of elements, but some of them are part of a group. For example, I want to change a custom parameter of a wall but I get an error saying the following: [image] Any Ideas?

If it’s greyed out in the project parameter settingd, it’s greyed out to the revit api. Many parameters cannot vary at a group level, text is the main one that can i believe. This blocks off dynamo to most grouped objects beyond a text based level in my xp.

I’d like to think there’s a way to dive down into the group definition and muck around with its elements but havent seen a way to do this. Dynamo is blocked off from running whilst in group edit mode.

Time to get the torches out…

Mostly we change length Parameters… is there way to store doubles in strings ?

Are there dynamo topics around this?

Unfortunately the one thing they all have in common is they cannot change elements geometrically, or be tied to field types that can. You can store numbers as text, but wont be able to hook them up to length fields in the families. Theyre in a group so in principle cannot deviate from the group definition in any way which changes or relates to other elements. It’s a hardcoded revit limitation.

Simply put, you cannot edit groups via the api, which means you cannot edit them via Dynamo or any other Revit add-in. This building coder blog post outlines one workflow, but as noted there this more or less removes the usefulness of groups: The Building Coder: Editing Elements inside Groups

Group editor api has been a wishlist item for like forever! I remember submitting a wishlist item like 6 years ago which got merged into another one older than that. I wonder what the upvotes are on that… Probably all the devs by now.

It’s a VERY big lift. If you think of the complexity of sketch editor, Group editor easily adds 10x that AND increased stability and testing concerns.

May not matter, but you can try this: SetAllowVaryBetweenGroups Method

Ha, I know I know! Doesn’t stop us devs from moaning at the mere mention of no api support though!

May not matter, but you can try this: SetAllowVaryBetweenGroups Method

This will only work on certain parameter types, I think bound by the same rules as mentioned already if memory serves me right.

i had a similar issue here…

Create group by Ids, it works - BUT? Revit