I have created a script that creates Area Boundary Lines on the center lines of walls, between rooms, and between rooms and curtain walls. 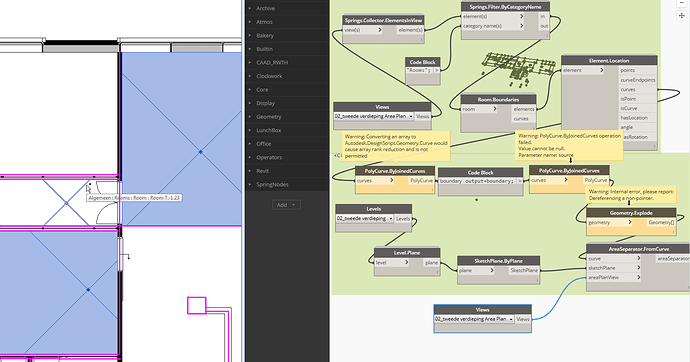 I suspect that the problem lies in the Python Script of the Element.Location node.

I really appreciate any help.

It seems confusing: is it not the tool you describe at first place? Could you elaborate a little on the difference between both?

It seems confusing: is it not the tool you describe at first place? Could you elaborate a little on the difference between both?

The difference is that the tool does not place Area Boundary Lines on the center line on curtain walls.

So if you want to also create lines for the wall centerlines, you will also have to collect the walls and obtain their centerlines.

The script is already create lines for the wall centerlines, the prablem is only that it does not create Area Boundary Lines on the curtain wall centerlines. The Element.Location node has a Python Script that locates the centerlines. 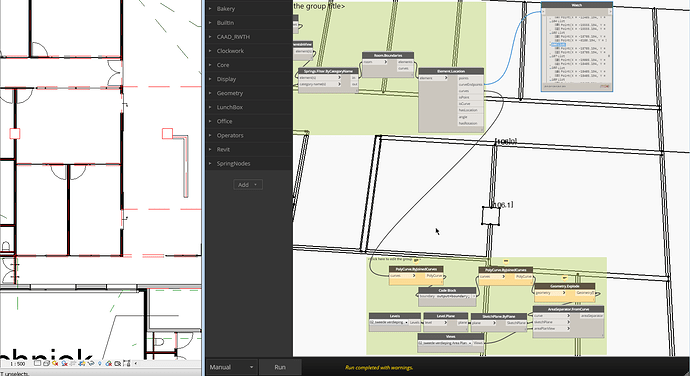 Did you try with the OOTB Element.GetLocation node? It works correctly on my side.

How would the Element.GetLocation node fid in?

Very quick answer, it needs elements as an input, see here:
http://dictionary.dynamobim.com/#/Revit/Elements/Element/Action/GetLocation
Or try the forum search tool.
I just used a Select Model Element node to select a curtain wall to feed in.

Totally right, I did not get that point in the question…

@Wouter - Sharing the script (or rather the relevant parts) you have built and a sample Revit file will make it so others have a way to experiment and help you solve your problem. The fact that your room boundaries appear to not be picking up the location of the curtainwall correctly has me wondering if there is something odd going on (a room separation line that was added to tweak the room geometry as one example).

Thanks for the help.
I found that the problem lies in my Revit sample. The problem was caused by Room Separation lines who were placed on both sides of all the curtain walls.

Ahh I had misunderstood the language of your initial post - I thought you were trying to create separation lines for 1) the rooms (so the faces of the bounding walls) and 2) the center lines of the walls, including curtain walls. In retrospect, I don’t know why anyone would want to be doing that, ha, but that is why I said this part:

Also I am wondering what the purpose of the Element.Location node is because the Room Boundaries output node already outputs the curves.

Bad inputs make for bad results. Glad you were able to resolve this though.

Can you confirm that the separation lines are generating correctly now sot that future visitors can learn from this thread?