I am trying to bring Rhino Arcs into Revit and developed a very simple workflow to do this. This was working fine a month or so ago and I have now returned to update the geometry and the arcs I am bringing in to Dynamo have an inverse sweep angle. For example if I have an arc with an angle of 10 degrees, Dynamo will create an arc with a sweep angle of 350 degrees.

Has anyone had this problem before?

I have been trying for hours to find the issue. I really don’t want to change the script as it was working before. My IT department had installed a new version of Dynamo (1,3) on my machine. Thinking this could be the problem I had them reinstall the original version I had used (1,2,1), but I still have the same problem. 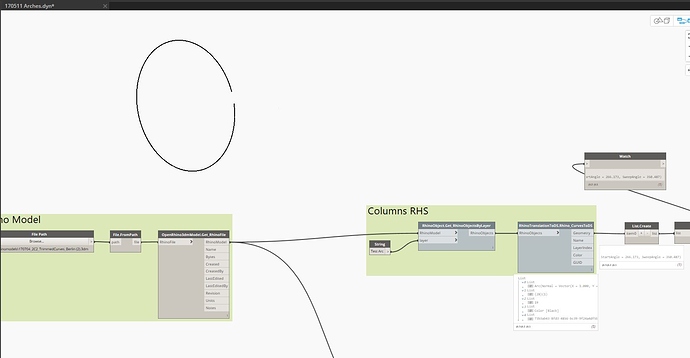 An update on this, I have the same issue when using Mantis Shrimp

I personally think you could try importing three points on the arc and reconstruct it in dynamo. May require a little grasshopper work or even custom script tho

And that is the reason I am a novice, so easy when you know how! Visualizor thank you so much this worked perfectly.