Several of the archi-lab.net nodes (thanks, konrad! ) are now built into Revit Dynamo 1.3
The problem I’m having now is that I need to replace a whole bunch of nodes in my graph.
Any some of the names of the nodes have changed.
Is there a document somewhere that maps the archi-lab.net nodes to the ne built-in nodes?
One example: archi-lab had a node ViewFilter.CreateRule
I think that’s been replaced by FilterRule.ByRuleType, but I’m not positive.
Likewise ViewFilter.CreateFiler – > View.AddFilter
ViewFilter.Rule Types – > ?? RuleType.Select Rule Type maybe?
ViewTemplate.View Templates – > ??
View.Fill Patterns – > FillPatternElement.Fill Patterns (I think)
View.AddFilter – > View.AddFilter
View.OverrideGraphicsSetting – > View.SetFilerOverrides ??
I think I’ve got most of those, but some are different and I had to re-install old versions on a different computer to even see what they did and where they came from

Well, I would uninstall Archi-lab for a moment. Open that graph and let it break. All missing nodes will be there but they will be red. Then you can search for nodes with similar name, and since archi-lab is not installed it should return the built in nodes. Swap all of them, install archi-lab again, and you are good to go.

Two I’m having a particular hard time replacing are

The closest I’ve found to replace Sheet.Viewports is Sheet.Views, but it uses different inputs. I had been piping in the Sheet’s Element ID, but Sheet.Views doesn’t like that.

Well, so the idea was that you replace all filter related nodes with core nodes. I didn’t anticipate you being able to replace ALL custom nodes with core nodes. That won’t happen for a while. That’s why I said you can uninstall archi-lab “for a moment”, replace all FILTER related nodes, and then install it again to bring back other custom nodes that you might be using.

My bad. I apologize.
I hadn’t realized the difference between the yellow “Unresolved” nodes and the red “Not Found” ones.
Once I reloaded archi-lab they were all happy.

Sorry to be a pain, but there’s one node that is no longer in archi-lab.net 2016.13.4 that I can’t find an equivalent for in Dynamo 1.3
And this time I do have the correct versions installed

There was a node called View Templates that had a drop-down of all the View Templates in the project
Can’t find that in 1.3.
The closest I’ve found is View.IsViewTemplate which makes me think there is another node that returns every View & that needs to be filtered down to VTs. But I don’t see Get Al Views, in 1.3 either

That should still be there: 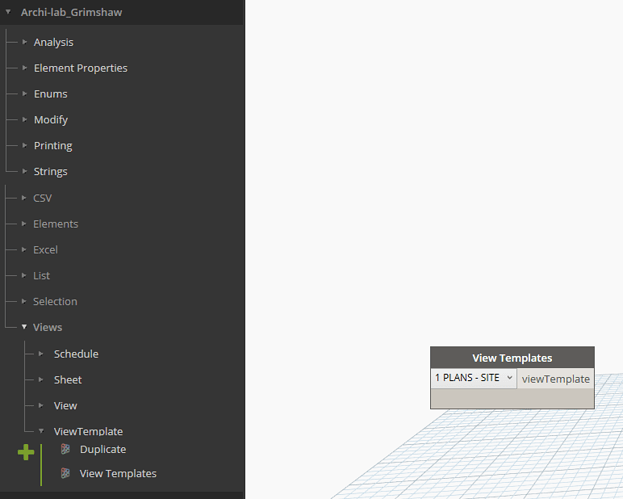 I do have one error notification showing, saying there’s a conflict with archi-lab_grimshaw
It lists several dozen possibilities for the conflict. I saved them as the attached .txt file

I have a few packages loaded, but I don’t see their names in the error list.
The names don’t mean much to me, but it looks like it’s mainly core functions
I’ll try disabling everything except archi-lab & see it if clears the notification and/or the node shows upConflictNotification.txt (2.3 KB)

My brain hurts.
It’s working now.
I’m trying to develop for Dynamo 1.3, but we haven’t distributed that version to the rest of the office (160 users). They’ve still got 1.2
So I have to somehow maintain two versions of everything - graphs as well as packages.
Somehow I was still pointing to both the old 2016.12 version of arch-lab AND the 13.4. That’s what caused the conflict.
Even after I deleted my Dynamo Revit\1.3\Packages folder and repathed, the old 1.2 versions got copied back in

It’s going to be a pain to maintain two versions.
I can’t upgrade everyone who’s using 1.2 until I’ve rebuilt them in 1.3, but I still need to do maintenance on the old ones.