Does anybody know or understand this error:

I don’t understand it. What is going on? 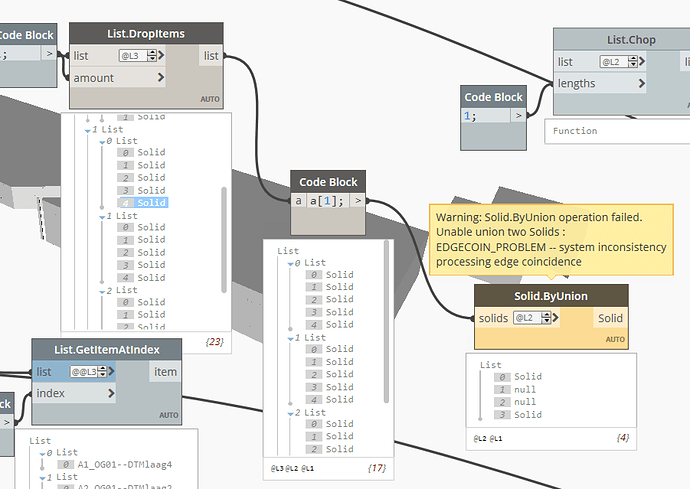 [image] I would like to combine all elements’ solids into one solid. But when I used ‘Solid.ByUnion’ node, the error comes out (EDGECOIN PROBLEM). I already tried to explode all element solid into surfaces and re-joined it, but the outcome was same. Anyone who had the same problem??

Intersection Issue between a Polysurface and a Mesh: EDGECOIN_PROBLEM

I have a mesh (input “geometry”) and a surface (input “other”) going into a Geometry.IntersectAll. It is giving me the error “EDGECOIN_PROBLEM – system inconsistency processing edge coincidence.” I have run a Geometry.DoesIntersect node on the same inputs with a List.FilterByBoolMask and it gives me the right configuration without cutting the excess lines. I cannot find any information on the error to determine the issue. [image] This runs a mask to find the intersecting geometry but doesn’t …

It seems that your geometry is too complex and somehow cannot be used for boolean unions.

Instead of creating families from the project environment, you can work in the family environment and then import it in the project. In this way you don’t need to merge solids.

You can use Springs.Form.ByGeometry to convert (“bake” in grasshopper) from Dynamo to Revit geometry, apply the material and then load in the project.

Thanks for your reply, @lucamanzoni. Just 1 question, can you explain me why it is called a ‘boolean’ union, or a ‘boolean’ operation? I see this term often but do not really get why it’s called ‘boolean’.

Boolean operations are operations involving boolean variables, which can be only TRUE or FALSE.

The operation of solid UNION, SUBTRACTION and INTERSECTION are the geometrical equivalent of these booleans operations:

In mathematics and mathematical logic, Boolean algebra is the branch of algebra in which the values of the variables are the truth values true and false, usually denoted 1 and 0 respectively. Instead of elementary algebra where the values of the variables are numbers, and the prime operations are addition and multiplication, the main operations of Boolean algebra are the conjunction and denoted as ∧, the disjunction or denoted as ∨, and the negation not denoted as ¬. It is thus a formalism for de...