I have a question regarding the awesome Data-Shapes UI. I have a Dynamo 2.0.4 graph that I have affixed a UI Multiple Input Form onto the end of the operation in order to report some key statistics on the graph output.

My issue is that the UI form instantiates twice each time the graph is run. Ideally I would like this operation to occur at the very END of the graph - one time- and yet the first instance happens shortly after running and the second instance at the end. I have tried adding a transaction end and start, as well as various script sequencing nodes like Passthrough and Await with no success. This is my latest unsuccessful effort: 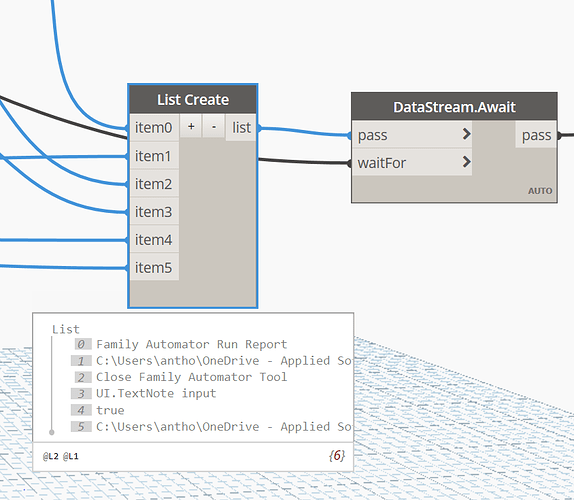 I don’t fully understand how it is even able to run the first time, as the data it is required to output only can exist after a portion of the graph is completed that is not finished at the time of the first UI instance. This portion is the Archi-Lab export image by view FYI.

I did see that an older thread referenced possibly the same issue, and the prescribed solution was to build in a wait function but that has not been successful for me thus far.

Thanks for reading, any suggestions or tips are appreciated!

All the best,
Anthony

Also addressing the linked thread - the issue remains present whether I close and re-open Revit and Dynamo or I run this in the Dynamo Player.