Hi,
I made a script to auto dimension walls and it works great with 2 problems.

First, as you can see in the picture, the first edge is not an exterior face:

Second I would like the reverse order, in that sense, the 0" reference would be the first right to left.

I still don’t know how to find the exterior face of the adjacent wall.

It could be easier to retrieve the vertical edges of the wall.

Hi Alban, that is exactly what I am doing: 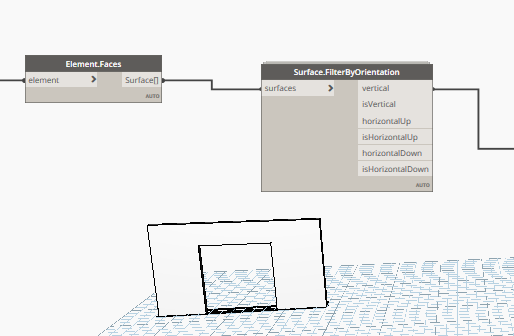 but when the walls are joined, it finds the last face before the outermost face.

I just tested different types of joins and it is working fine:

Thanks Alban,
We are using a very similar approach.
The thing is the wall does not goes all the way trough,

The wall selection shows that my wall end’s at the adjacent wall, So I am using the vertical edges but the wall does not go all the way to the outer edge.

There is probably a way to change that.
I would like to grab that adjacent wall and include its outer face into my dimension references, just don’t know how to yet.

I’ve found in the API a method called ElementsAtJoin from the class LocationCurve, but haven’t figured out how to use that yet.

I found a way.

That will return the walls joined at each end of the wall, then you can use that to extract the exterior front face of the wall and use that as a reference.

Glad you found a way !
Here is an equivalent with custom nodes.