Anyway to Place a Detail Item on Plan by Coordinates

We have a script that currently utilizes the FamilyInstance.ByPointandLevel node to place a 2d detail item on a plan view which works with the exception that the view that the detail items get drawn on ends up being nearly random so we end up having to using the dynamo object list to find the placed items and then move them to the proper view.

Is there any node for placement of detail items in a specific plan view by a point?

Springs and Archilab both have custom nodes for placing a detail item in a view. 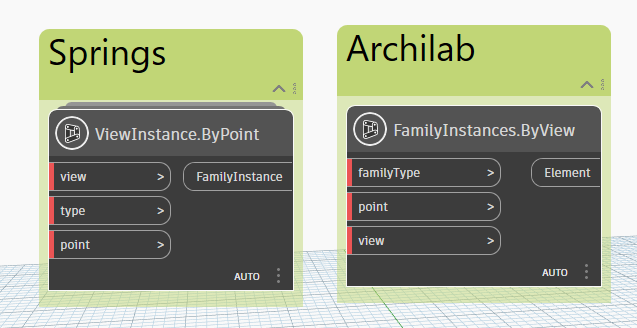 However, something seems a little off. If you’re placing a view specific element then I wouldn’t think that it would allow you to create the element without a view. I also wouldn’t have expected the element to have a level assignment since it wouldn’t be a 3D view.

hmm was hoping for a default node, most our end users have no idea how to install any of the extra packages.

I could have sworn there was a OotB node at one point but I couldn’t find it. You could also use python and the API.

Thanks for the link to the API docs had no idea that existed.
You wouldn’t happen to know the syntax for calling these methods with the python node in dynamo (funny how the API docs provide examples in several languages except the one included in Dynamo).

If you do a little searching through the forums you should be able to figure it out. It’s not too difficult, mostly just understanding the difference between declaring explicit variables as shown in the documentation and the implicit assignment that’s done in python.

Thanks was doing just that, have yet to try any actual Revit interaction with a Python node looks like a few intricacies in dealing with the transaction and element unique ID managers. Will need to play around with some test models at some point.