Algorithm input on a miscellany node

Anyone know what I can plug into the algorithm port?

It says default 1 but any other number makes it not work. 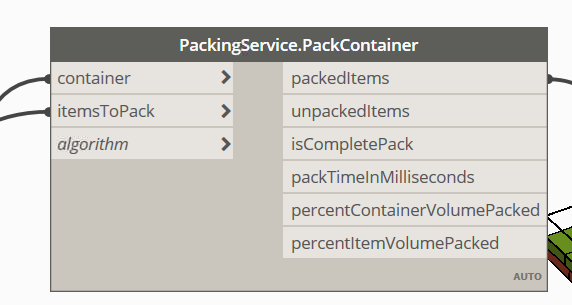 No other implementation has been built up last I knew. The bin packing nodes in the Refinery Toolkit are a bit more complete for that reason.

My refinery only has one 3D packing node and three rectangle ones.
I was rather miffed when I discovered this at 8pm the other night after thinking I’d finished and had a choice of three 3D packing nodes.

I re-wrote it today using the Miscellany nodes but I actually don’t think any of them pack as nicely for a series of buildings as the one refinery node.

(I just discovered Mr Octopus here, nothing to do with the rest of the message but he wanted to be there).

I looked at Topologic too but it needs a later version of Dynamo than Revit 21 has.

Do you know of any more packing packages I could try?

What are you actually trying to solve? Most dives into bin packing can be accomplished in ways which give better exploration of the options if you use another means.

Feel free to DM me if you would rather discuss via other channels.