What decides the placement of wall based families?

I have picked up the door location and created two wall based families by offsetting it from door center,
it seems like there is some hidden parameter to decide what side the family has to take. 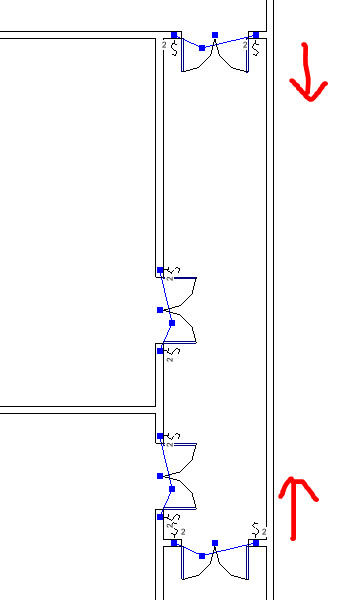 *Some families facing down while some are facing up.

Even If I try to move the points towards one surface of the wall it still hosts the same way.

I drew the upper wall right to left, the lower wall left to right…

Yea Mark at least in case of door /Windows you will have the option to flip afterwards with FamilyInstance.FlipFacingOrientation" node but in case of receptacles ist hard to filter the one as they both show same vector as output
please see this link:

Hi Guys I have created two wall based families that are flipped and opposite to each other but on the output of this graph the vectors for both the families are equal how could this happen? [image] I Actally wanted to find the orientation of one and flip accordingly. Is there any node that lets to calculate the sides used/orientation within the family? Thanks.