A few months ago I thought it would be fun to try and parse the 2017 RevitAPI.chm ‘help file’. A few custom scripts and some Regex later, I had the data in a few Excel tables. I then starting trying to visualise the information to try to find a new way to understand how the API is structured. I’ve not spent much time on them, but below, are some of the visuals:

A donut graph of the most commonly-found parent classes.

Here’s a screengrab of one of the data tables in Excel. 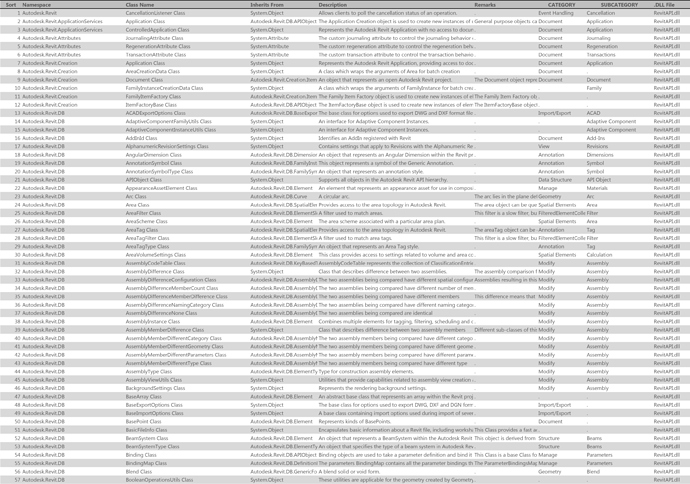 For various reasons, I’ve done much with the raw data yet. Instead - I’ve decided to release the data to anyone who’s interested. I’d particularly like to see if anyone can turn the class inheritance data into a nice collapsing tree diagram

While not intended as a replacement or alternative to helpful resources, such as revitapidocs.com, I imagine some might be curious or interested to see what they can learn from the raw API data. And before some of you ask: yes, I intend to do this with the 2018 API. When I get around to it it’ll take a couple of days.

Here’s a link to the Excel file - let me know how you get on with it / if you make any cool visuals!