Placing Annotation Based on Bounding Box in Detail Views

I’m putting together a graph to place an annotation in drafting views and add the view name to a parameter in the annotation. That part works fine. The location of the annotation is an issue however, since initially I placed it at 0,0 - but that point is not always near the actual objects in the view. I managed to cobble together getting the bounding box of the elements which works great if I only run it on one view. When I try to run it on all views Dynamo explodes (Issue 1)

Issue 2: I need something between the Springs.Collector.ElementsInView and the BoundingBox.ByElements but I have no idea what.

Issue 3: Once I get a huge list of points, I have absolutely no idea how to break that list down into something manageable that will work with Points.DeconstructPoint and Point.ByCoordinates. If I only have one view selected, I can feed the deconstructed points into the Point.ByCoordinates and it works, which is ideally the goal. 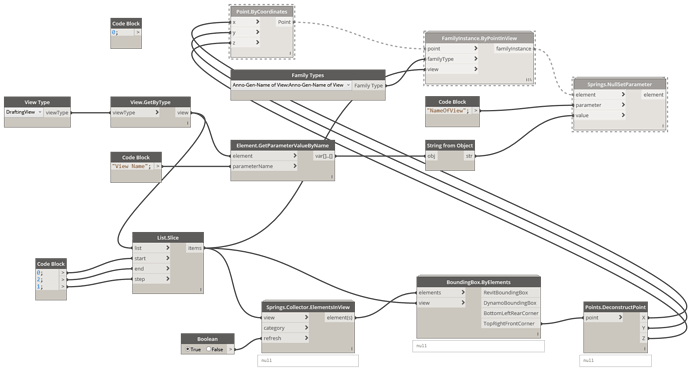 Monday was apparently not my day. I changed the lacing on the BoundingBox.ByElements and that took care of most of the issues, however some of the Z values coming from the bounding box are showing up in scientific notation (-7.9540037875688e-15) and the node is failing, but I’ll start a new post for that because after looking at it a little I think it is an entirely different set of problems.

edit: turns out there were some nulls in the list. removing them using seems to have resolved everything.