Today i ran across an warning in one of our dynamo scripts which hasn’t occured before.
Used the script multiple times before without any warnings.
First screenshot is the working version, Second one contains the warning.
Any solutions? 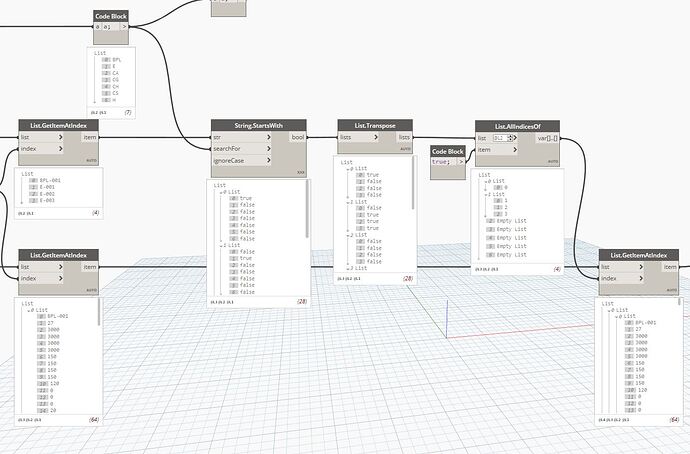 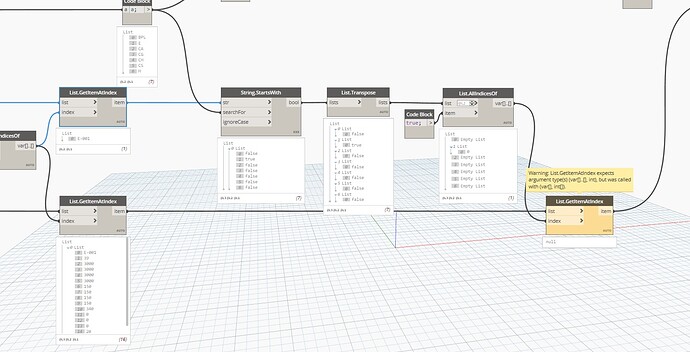 Have you just tried replacing the node?

Try removing the nested empty lists from the List.AllIndicesOf Node.

@Alien Tried, but it didn’t work

@daniel1 I want to keep the empty lists for the structure of the whole list, otherwise i have to find a way around it to reorganize the list

From my experience, the List.GetItemAtIndex node typically errors out when it is fed with nested empty lists. I would restructure the graph in order to prevent the issue. Without seeing all of the nodes and dropdown previews I can only offer a few bits of advice.
Input the List.AllIndicesOf node into a flatten node and a count node at level two. Input the flatten node and the count node into a chop node to reproduce the original structure without the empty lists.

List.GetItemAtIndex node typically errors out when it is fed with nested empty lists

Most nodes will fail this way when given an empty list as the first item. It’s always best to clean your data or account for the issue as you go.

3 off the top of my head options to deal with the bad data:

Recently updated to Revit 2021, Issue seems to be fixed in Revit 2021, All nodes i’ve used in dynamo seem to work when they’re fed with nested empty listst. Huge relief for my dynamo scripts.