Hello,
I tried querring the level from some conduit and pipe and the level.name node is returning the type name. Not the level name. Is this a bug? Also, I am trying to remove empty slots from my created lists, but the list. clean node seems to be doing nothing at all, in the dynamo dictionary it says it is supposed to remove empty values. Is this a bug as well?

So I tried to create my own work around by eliminating the nulls from the beginning, by checkin to see if the parameter exists, but I am also getting strange values from parameter.hasvalue nodes as well. Please advise. 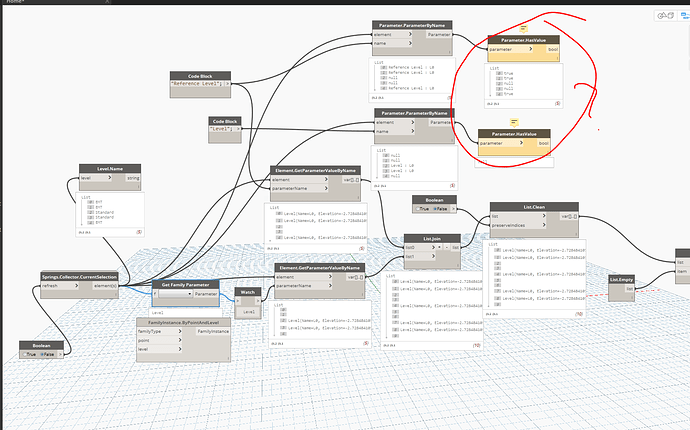 The Level.Name node expects a leve as an input. You’re giving it not levels so it is giving you not level names.

It may throw an error but that shouldn’t actually get anything wrong, more an under the hood thing as best I can tell (the level name node as a stand alone does the same). The Element.Name(Universal) node from clockwork doesn’t throw the error but gets the same results for me, so if you want to keep the graph error free omit the .Name portion of the codeblock and use the clockwork node.

Thanks Jacob! any advise on the list.clean node?

You can use either the code block on the upper half or the nodes on the lower half. Whichever method you are more comfortable with.

Your nodes are unreadable

ah! Apologies! I’ll upload the dyn on my break for everyone to reference.

Screenshot with text. Wish I knew why that had happened.