hmm that seems to return some true values. I get a list of 180 true values, but for some reason that bounding box dosent tie back to the specific revit family it was created from? What I was trying to do is pass a string to a revit family based on the True/False Result. Right now the first 180 revit family entities get the modified parameter not the 180 actually associated with the bounding box that returned the true result.

I pulled directly off the BoundingBox.Contains Node, i just had UniqueItems as a way to debug and see if i was actually getting any True results.

Could you develop your Geometry.BoundingBox and BoundingBox.Contains nodes to show the resulting lists?
(use Springs.Watch+ to display the data’s in a pop-up if needed)

What I was trying to do is pass a string to a revit family based on the True/False Result.

You need to map your booleans list with families.

What does your list look like that is coming out of the contains node. You don’t want to flatten the list. you need to manage the data.

What is the end result as well. do you just need to know if the bounding box contains a single point or all the points? Or vise versa do you need to know if a point is in the box?

@lmanos Drop your files in google drive or dropbox and share link here. So that we can provide you possible solution.

Forgot to send this one as well. This is for if you need to know if the point is in one of the bounding boxes.

I have not gotten a chance to try @Steven_Hansen’s solution yet.

But as an higher level overview I am trying to track soil excavation by adding a parameter to 1 cubic yard cubes that are above a topo surface. This topo surface would be updated weekly and the script rerun. Each cube has a very specific set of parameters so I cant combine them.

The way it currently works is i group the ‘stack’ of cubes, and then draw a line between the top and the bottom cube and find the intersection of that line and the topo surface.

What I need to do is then isolate the cube, or cubes, in that stack that has a centroid z value above the z value of the new intersection point and pass a new parameter to it. This however has proved much much more difficult than I thought.

I have gotten a primitive version of the script to work, not uploaded, but due to the scale that I need to run it at (11 acres and 24 feet deep) it would take an estimated 25 days to complete. This was mostly because I checked every single cube against every single intersection point causing for tremendous amounts of unneeded calculation.

I think this should do it for you.

@lmanos
Although I find the topic particularly interessant, I can’t go further for today. I just want to share what it inspires me: I would indeed follow the track of joining the cubes (only in Dynamo for selection purpose, not the originals) but using this method: 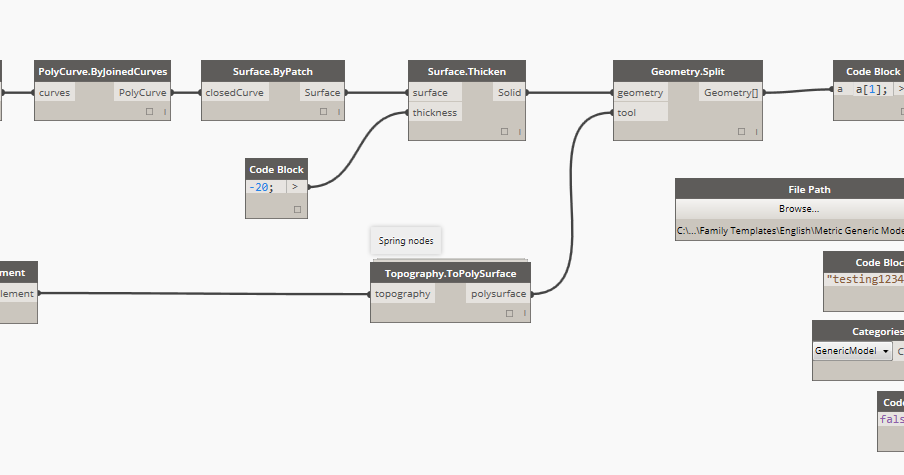 I've worked with Revit as a modeling tool for quite some time now and every now and then I face the need to cut objects with a topography. T...


This way you get the volume over your topography and it’s probably possible to select the cubes that intersect with that resulting volume (I didn’t try but I will if I find the time for it). You could need some nodes such as Solid.ByUnion and Polysurface.Surfaces.

Ok, @Yna_Db, I’ll bite… I may be misunderstanding your issue here, but I would not go through all that sorting and stacking and intersecting etc. Won’t the point.project node suffice? If I have understood you correctly you can also filter out all the boxes which already have a parameter for excavation date set, right? Then you can try to project all these points toward the toposurface in negative Z direction. If it fails it means that the centroid is below the surface and will return empty list. then a simple sorting and then you have all your boxes above your topography which do not already have an excavation date set.

Dropbox is a free service that lets you bring your photos, docs, and videos anywhere and share them easily. Never email yourself a file again!

Also remember the Dynamo/Revit element binding, so that not any parameters are overwritten/deleted etc etc.

Another trick is to click Run on manual mode. When you click run again and your elements disappear, make sure Revit is active then undo the change as this will restore the first set of elements. Click Run again and you should end up with both sets of data without needing to close/reopen Dynamo or Revit.

@Steven_Hansen; This seems like it would work however in my sample data set there are 550 cubes, I’m using the FamilyType and the All Elements of Family Type node to compile my list of cubes. The Z intersection list is only 110 items long. This solution only checks cube 1 against intersection point 1, not all 110 items. I’m still looking for a way to compare every cube to every intersection point, or the intersection point specific to that specific stack of cubes.

(im still working through your PM)

Your method of selecting should work fine with the script. The intersection list would be less because it is based on the stacks. I am guessing your stacks are 5 cubes tall? Looking back over my script I think you need to change the lacing on >= (at the end) to longest. That should allow it to check ever cube in the stack rather than just the first one.

If you have not found it yet you will also need to get the PointZ from the Geometry.Intersect and feed that into the >=. I guess you cannot check to see if a number is greater than a point

@lmanos
When you have time, could you also tell us why Jostein solution doesn’t work for you?

Took a second and downloaded you Revit file. made some modification to my script should be good to go now.

One of the main reasons it was not working was because the cubes were slightly off from one another. I added the math round so it would be able to fine them easier.

Let me know if this does what you need. also if you could answer @Yna_Db question. I think Jostein solution would work but would be good to hear your thoughts.

Sorry to delay everyone one, didnt have very much time to work on this today.

@jostein_olsen you sir are a genius! I first started with a point projection logic but ended up having issues so abandoned it and started the line intersection nonsense.

@Steven_Hansen, yah i ran into the rounding issue as well. you would think using the revit array tool everything would have been lined up, but shame on me I guess for not going and checking their alignment. This definitely aligns much closer to what I was trying to do. I will have to check which code runs 11 acres worth of cubes the best.

I can not thank all of you enough! People like @jostein_olsen and @Steven_Hansen, @Yna_Db, @Kulkul, (and @T_Pover) make this forum awesome!