I think theres something fundamental I don’t understand about the “If” node. I’ve used it a few times as a way of being able to run one script in a dynamo file without running the other ones… but it seems that regardless of how I structure my if statement, it generates an incorrect result.

I’ve got the script to this point (see image), and for some reason, it is only generating the “Y Distance” at index 0, and nothing else from that list. 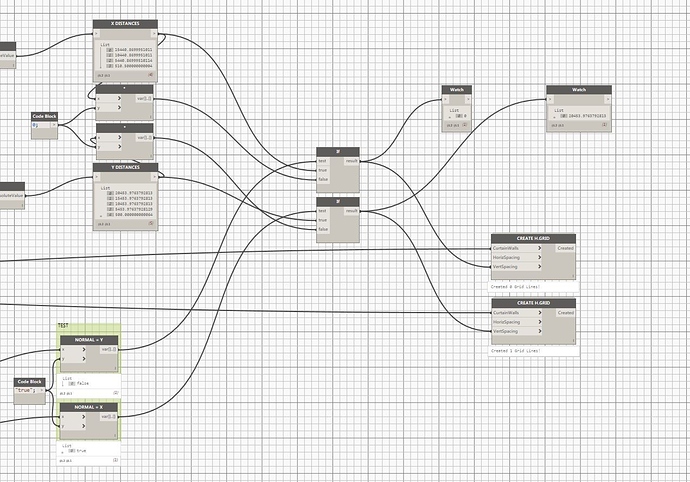 Hello, I would first say that your grids are created before the use of the If node which is pointless where it stands. I would probably try to use the Tool.RunMe from SteamNodes in your case.

Strange indeed, it seems to work with lists:

I would try to insert a Flatten node after your == nodes, just to check if it helps…

The list of data was already output as a list, but just to test it, I fed the data through a list node, and then through the if statement. Weirdly, the watch nodes display the desired outcome, but the grid itself is not created in revit… It still only places the last gridline 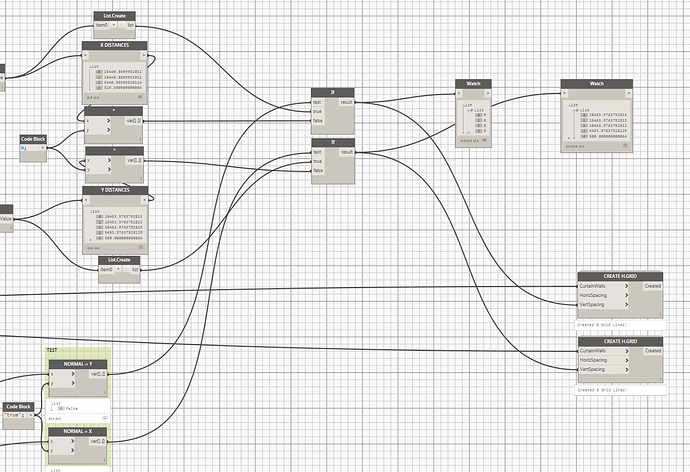 The flatten node just generates the index 0 data from both if statements again (the original problem). Closest I’ve got is threading the data out of the Math.Abs Node, into the List node (effectively making a list of a list), and than through the respective if statement node. Like I said before, this generates the correct data coming out of the if statement, but it won’t translate in the Revit workspace. Might be a problem with the Create.CurtainGrid Node at the end of the script?

I don’t think threading a list through another list is the solution, as it seems redundant. I’m most likely spinning my wheels

Didn’t try that package before. Did you check if it doesn’t want UV’s instead of distances?

It seems to be asked for a vector in the node code:

I tested with just numbers, it works just fine. I don’t know what the difference is between the data input with the code block (in image), and the one I tried coming out of the Math.Abs Node??

Those are maybe text formatted, but I don’t get it right now, actually, I have to give up for today