How to take an input into a Ctype

Hello,
I was looking at this forum post here:

Background: I’ve got a script that takes awhile to run, so I’d like to append a node at the end of the script which will cause a system window to pop up over whatever other windows I’ve got open so I know that it’s done. I can use Iron Python to run this code:[image] which get the results I want: [image] But when I run the same code in Dynamo: [image] I get this error message: [image] So my question: Why can I call ctypes in Iron Python but not inside dynamo? Do I need to import another …

And I would like to make a CType window that pops up at the end of my script run just like this post wants. However, I want it to include data from my script to tell the user a specific number. However I dont know how to do that. My Python skills are extremely limited but I would like to figure this out. Besides that I am already using data shapes at the begining of the script so therefore I cant use them at the end. Please let me know what I need to do. Here is what I have so far: 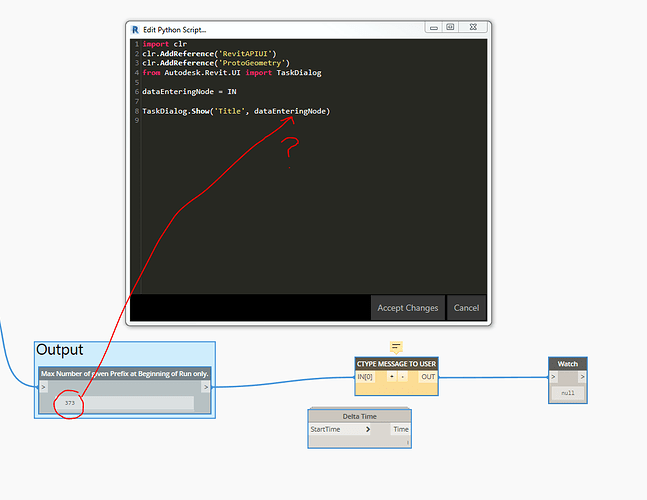 You need to import some extras from the RevitAPIUI before this will work.

But there shouldnt be any reason to not use the Datashapes UI again.
You will just need to enforce the run order of the Graph so the last input waits before promptin with the UI. 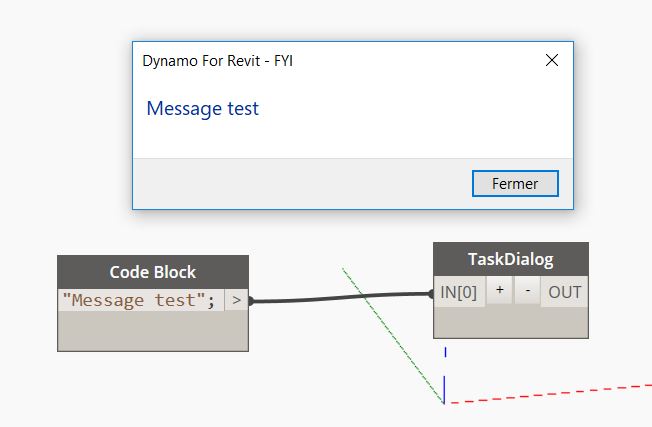 Thanks Ewan! So what does the b=TaskDialogCommonButtons.Ok line do? I dont see any reason for it. Likewise, the TaskDialog.Show(‘Title’, dataEnteringnode,b) makes sense right up until ‘b’. Because it doesnt show anything for ‘b’. So what is that for? I dont understand. Sorry I am just trying to learn. Alban’s makes a lot more sense to me, but I figure there has to be some reason for your extra code. What is it? Thanks!

also,
Is there a way to take information from users like this below, i cant seem to figure out how to set info in these buttons or extract it once its clicked on. Any more info on this node would be most helpful!

So what is that for?

This is the value I used to define a CommonButton for the dialogue.

You can have multiple buttons in your dialogues to be able to influence the progression of your workflow.
Here is how this can be used.