Packages
Lilli_Smith February 13, 2015, 9:28am #1
We've added some simple node grouping behavior and would like to get your feedback on this first attempt. To try this out download and install this build. Note that this version won't run on Revit so just use the standalone version (click on Dynamo in your start menu after installing). To use groups, simply select some nodes and from the edit menu "Create Group" or CTRL+U. A colored rectangle will be placed around the nodes and you can change it's color via the context menu. Double clicking on the group will allow you to change the text description. Below are some known issues with the functionality that we are working on. We'd love to hear your thoughts on this functionality, see what you can do/want to do with it, and learn about any other bugs you encounter.
Known Issues
Lilli_Smith February 13, 2015, 9:47am #2 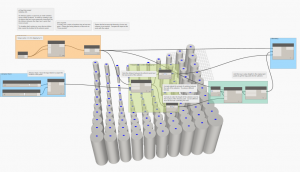 Is this moving in the direction that will allow (hope soon) users to save a “local” custom node?

Thanks for your work.

Adrian, it has always been possible to create local custom nodes in Dynamo.

Just make a custom node and save it in C:\Users\YOURUSERNAME\AppData\Roaming\Dynamo.7\definitions

Just about damn loving it

Aside the list of Known Issues i’d like to see a right-click option. And I’m guessing a few graphics updates like round corner is somewhere down the road

After installing this build, the Revit one won’t start.

Yes, not working in Revit is a known issue (it will work when we build it). Please use the stand alone version.

Here is an updated version with the context menu working to create a group.

Thanks for trying this out!

I meant that after installing it and running the standalone version, the Revit one wouldn’t start

I’m back on the daily build, will try again with this build

2 - When i restart Revit i get Failed to initialize Dynamo for Revit ( … DynamoRevitDS.dll)

One more build with CTRL+G to create a group.

First of all let me say I’m really excited about this. This is a really important feature for organizing our graphs.

I love the way the group area resizes dynamically whenever I move a member. And if all the known limitations are taken care of this is going to be so useful!

Now on to some observations:

There’s now an inconsistency in how right-click options for multiple selected items are handled. When I select some nodes and right-click on one of the selected nodes I get the “group” option, whereas when I right-click next to them I get the “new node from selection” option. Please make up your minds.

I would hope that the groups will look a little more “designed” once you include this tool in Dynamo:

I would like to be able to edit the group name directly in canvas (just like I would love to be able to do the same with notes and Python scripts BTW). I find the current mode of editing disruptive and unnecessarily complicated. (There’s no right-click to edit for CBNs, right?)

But here’s the real challenge:
Groups need to survive the auto-layout tool. Pressing Ctrl + L will cause the members of the group to not be in the highlighted group area any more. Interestingly enough, they do maintain some form of association as moving the group area will move the (now far away) nodes as well. So I think you’ll need to teach this group functionality to the auto-layout tool. (And while you’re at it, perhaps have a look at this issue, too: https://github.com/DynamoDS/Dynamo/issues/1920)

In the future, another interesting aspect of these groups may be the ability to collapse and expand them at will.

This is fantastic news. Glad to have this in our hot little hands.

OK without doing too much research -

Is there a way to have a ‘live’ custom node yet to compartmentalise the tree in the group manner, or-

can you fix the size of some nodes in the tree, so there is a ‘drill down’ action whereby you can have multiple layers of the tree, eg. aerial/local/atomic.?

How far out is this from a 0.7.6 stable release? I’ve downloaded a few packages that are using the newer versions.

Thanks everyone for the great feedback. We are working to fix some bugs and put some more polish on Groups and to get them into stable 0.7.6, but aren’t sure if they will make it yet. Who thinks they should go in in the state that they are in in this special build?

I think the conflict with the auto-layout tool is a rather important issue that I would rather see fixed before groups go into a stable build. Everything else is just cosmetics in my opinion.

The functionality of the groups is quite important for organizing big graphics. I would prefer that it is already in the stable 7.6 or at least in the dailybuilds.

It is a pity that is not working together with the autolayout. But maybe the solution is that , by the moment, you can not use both at the same time (for example, if you try autolayout with groups already, you get a notification that the groups will be discarded). So at least you can choose if using auto-layout or groups.

I think groups as colored backgrounds is good to structure the graph in a makroscopic view. To indicates the different sections of the graph node.

I’m not sure if the solution for many small groups is handy.

So I created a little mockup, how I would like to see a group node in Dynamo:

So I created a little mockup, how I would like to see a group node in Dynamo:

Is it still true that there is no add to/remove from group functionality?

I wouldn’t mind ungrouping and regrouping so much if I could set default group styles (color, font size).