If you haven’t checked it out yet, Dynamo 2.13 is full of a LOT of cool new stuff (see the many blog posts about it from @solamour for more info). One of the more exciting aspects of this is the graphical refresh - all nodes are now a charcoal grey!

So far this has been quite nice on the eyes (much softer in terms of the brightness anyway - it’s like dark mode), but as a part of that refresh something else changed: the size of the nodes themselves.

At first glimpse this seems like “not much of a deal”, but as @john_pierson pointed out to me on Twitter the other day, once you look at it at scale things are a bit problematic. Because I want the community to suffer as little as possible in adapting to this new build, I present to you Resizer2022!

This python code will parse over every .dyn file in a given directory, adjust the node and note locations by scaling up their location value by the given X and Y scale factors, and then save each as a new .dyn in a directory with a ‘resized’ suffix.

Hopefully this will be of some use as we jump into the 2023 product line.

I did not realize it was going to make an entirely new directory. When I stepped back a folder I finally saw it and the result is better.

Ah! Should have been clearer about the result. The intent is to allow mass migration of a graph library from 2.0-2.12 format to 2.13+ format for 2023 so you’d likely want a new directory anyway… wouldn’t be hard to just overwrite the prior file, but I figured it’d be best to keep the existing in place to keep from making everyone’s 2.0-2.12 graphs VERY large the next time they open them… 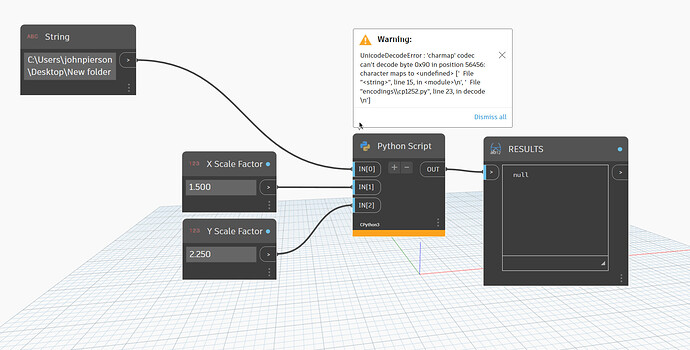 edit: it is freaking out because Rhythm nodes have the prefix of ʳʰʸᵗʰᵐ|. If we could account for this, that would be awesome as I know renaming nodes is a popular thing amongst users. Orchid renames their nodes as well.

edit: it is freaking out because of Rhythm nodes having the prefix of ʳʰʸᵗʰᵐ|

Sadly I have to find the right encoding for that text; I’ve had similar issues with non-Latin alphabets. I’ll see what I can do to account for all the combinations of special characters; Modifying the text to Rhythm| it may resolve it for the time being (although well less appealing a look).

Modifying the text to Rhythm| it may resolve it for the time being (although well less appealing a look).

That was my first thought as well, but that doesn’t help for existing graphs which this tool targets.

I think I can force a string.replace on it… but the goal will be to find the right encoding first.

I am pleased to say that I worked this out using the Dynamo API directly in monocle.

It is in the latest version on the package manager (which should be 2022.8.1) and the code is of course open-source here:

It doesn’t batch like the DYN solution above, but it also doesn’t have to account for encoding.