Can someone tell me what’s wrong with my script or with my project?
I’m trying to send information from my rooms to the ceilings, but for an unknown reason the ‘getsurroundingelements’ node gives me more rooms than I expected: 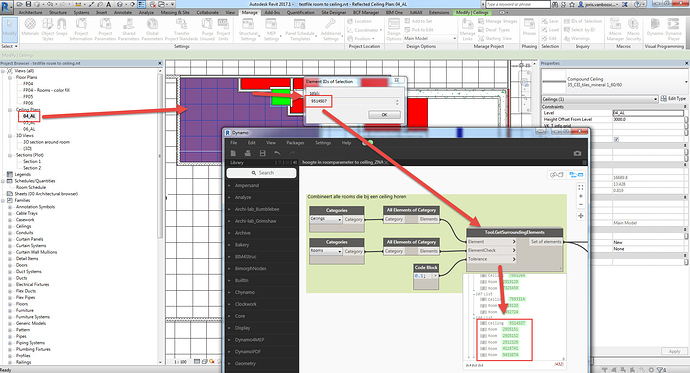 Hi, Get Surrounding Elements seems to use a bounding box method:

Hi guys! I had the chance to finish this script. I found that my best (and accurate) solution was to use Rooms Boundrais to create dynamo extrusions, then increase their thickness, and then Element.BoundingBox for the windows/curtain panels, then using GeometryDoesItersect I could have a mask to use it later to have curtain panels/windows grouped by rooms. Also I found that the node “Get surrounding elements” was using the BoundingBox method. that’s why it was not giving me accurate results e…

I’m following the script that is explained here: http://dynamobim.org/forums/topic/ceiling-height-in-a-room-parameter/ As result I have a ceiling height in the room parameter ‘comments’, but it’s not the correct one. How can I change my script so that the ceiling height is filled in in the correct corresponding room parameter? hoogte vals plafond naar ruimte parameter.dyn (19.3 KB)

@Yna_Db, does this means that the Get Surrounding Elements doesn’t work for non-rectangular rooms?

@john_pierson, I’ve tried to modify your script so that it works for all rooms in my project, without selecting them, but than I get following error:

Are all of the rooms reporting a location? You may need to filter out unplaced rooms first.