Get Rooms By Level - Broken

I am trying to get the “get rooms by level” tool to work, but it seems to be broken. See below for my two trials:

At #1 at the bottom, I tried to follow http://archi-lab.net/create-view-by-room-with-dynamo/ and am having trouble getting the “Get Rooms by Level” node to work. It seems that when I place a python script into my file and not the custom node, there may be an error with the LibGnet line of code.

So I went on to try to extrapolate the names of the rooms from the reference parameter, but I have a feeling it is not concatenating the strings of inputs it should be filtering per http://archi-lab.net/create-view-by-room-with-dynamo/ which looks like this:

Rather than trying to manually input each room name, I am testing my “Get Rooms by Level” with only one, which you see in both definitions.

You’ll see at Keynote #3 and #4 that the data isn’t making its way through the definition.

My two questions are:

I am not a programmer, nor am I very skilled yet in Dynamo. Thanks for any help you guys can offer.

For the get rooms by level you can use a method like this.

I am not sure if you need Rhythm in this particular situation.

You can achieve this task with either only OOTB nodes or using archi-lab like the OP has asked. Please download latest archi-lab as things has been changing in RevitAPI for 2016 and i just updated GetRoomsByLevel.

There he is! Yes, after I updated your package on my end that appeared to work as well!

I’m relatively new to Dynamo and, I’m really loving it. However, can room data be pulled from multiple RVT files instead of just the active session? Here’s what I have so far. I’d like to aggregate Rooms per a Department from multiple RVTs and, list their Number, Name, Level, and Area. Is that possible?

Are the models linked in to your model?

Also- You may want to start a new topic for this.

I will start a new topic on my reply above. Sorry for the confusion! 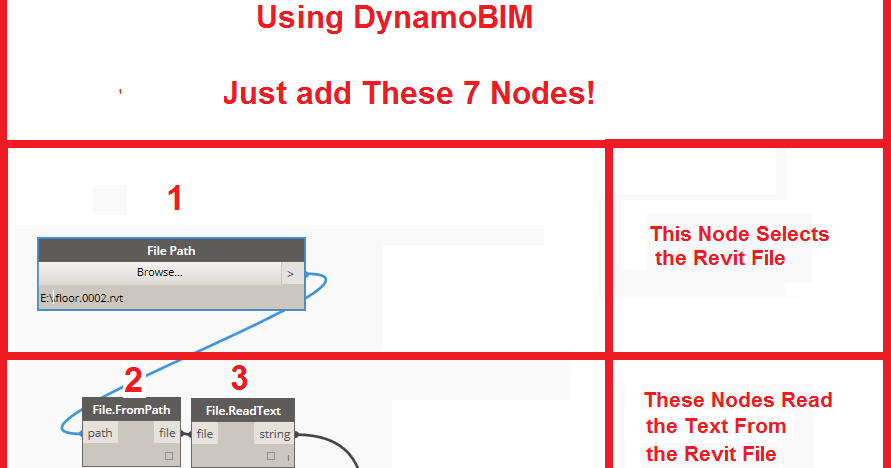 How to Get The Revit Version and Build Number Using DynamoBIM.

If you want to get the version and build number all you do is simply open up the .rvt file using DynamoBIM's powerful string reading tools! ...

I don’t think that functionality is available yet. But a video on youtube from Ian Keough hints that it may happen soon.

You can read the version of the file by opening a RVT file in text editor. However, thats about as much as you can get from it that’s human readable. What Ian is doing is using the Jurnal files (I believe) which store every click of the mouse that you have ever done in a Revit model into a txt file. That way you can re-create the model from just that information alone. It’s not the easiest of concepts but certainly possible.

I am guessing Ian will fold these new nodes into Dynamo in the near future.

I had the same problem as you, after an investigation, I found out that the method of accessing the Room Name parameter changed in Python Script. If you open the old Python Script in the Get Room by Level node, you can found a line wrote as " roomNames.append(i.get_Parameter(“Name”).AsString())".

If you change the line to “roomNames.append(i.get_Parameter(BuiltInParameter.ROOM_NAME).AsString())”, the node will work again.

I found that from the updated Get Room by Level node by Konrad K Sobon. Thank you as much for his contributions.