I’m trying to intersect walls of my model with cable trays. I don’t understand why it’s not working … I’ve done the same for pipes and ducts, and it was working …
I’ve tried in a smaller project and it works. But I’m trying it for my whole model, Geometry.Intersect is not working anymore …
Are there some specific settings? Is there a way to be sure that it will work?

Thank you in advance for your response. 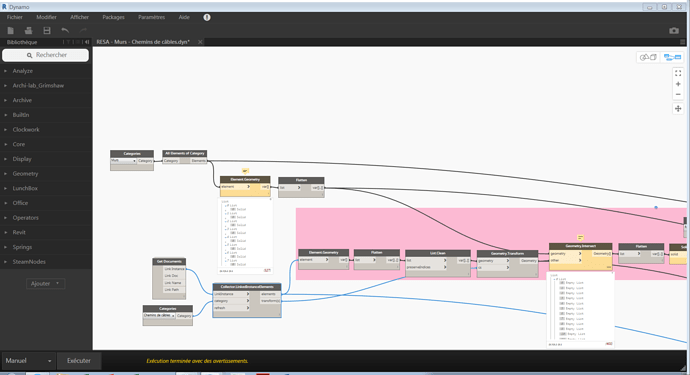 I see that you flatten the wall list. Is the other list (with the cable trays) also flat?

No, it’s not woking.
I’ve been using the same file for a smaller model and it’s working.
Is it possible to think that Dynamo can’t do Geometry.Intersect when it’s a big model?

I don’t think so.
Is it giving you only “empty lists”?
I think there might be a problem if one of the input is flat list a[] and the other is list of lists a[][].

Yes it is. You’re most likely working in mm. I’ve reported this issue a while back.

Issue: Failure to intersect and project geometry when working in millimeters

You could try restarting revit, switching your project to meters and performing the intersection then.

thanks, this is good to know!

Thank you for your answer, but my project is already in “meters” …

Then as an alternative you could try the following: scale your geometry down, intersect it, and then finally scale it back up to its original size.

If that doesn’t help, then the problem is most likely somewhere else.