First divide wall into parts, then select all parts

Now, what I would like to do, is to select the parts I just created and change "Mark" parameter.
This little operation however is starting to give me a headace

Any input will be greatly appreciated!

Post several screenshots or your files will be helpful

Sorry, I thought the .dyn file was attached.
I Hope that it is working now.

your file works fine to me, it doesn’t prompt the errors you mentioned

. Could you also post your .rvt file as well ?

@jshial, you are right, I just tried to restart Revit and Dynamo - now the error is gone!

But when one problem is solved, a new arises.

All Element Of Category can be very handy, feed it with Category.ByName(“OST_Parts”)

how do you want to set mark on parts ? I guess you need to reorganize the order of parts

, the order from All Elements of Category might be “chaotic”.

@jshial, you are absolutely right; the order IS chaotic - at best!

But I got that part figured out, fore the time being I’m using one script to divide the wall into parts, and one to change parameters for the parts.

I would very much like these two scripts merged into one, but I can’t figure out how to get dynamo to select the elements (parts) created during the running of the scripts.

As far as I can figure out, dynamo only selects the part present in Revit before running the script.

Let’s give it another go

This particular method is very handy 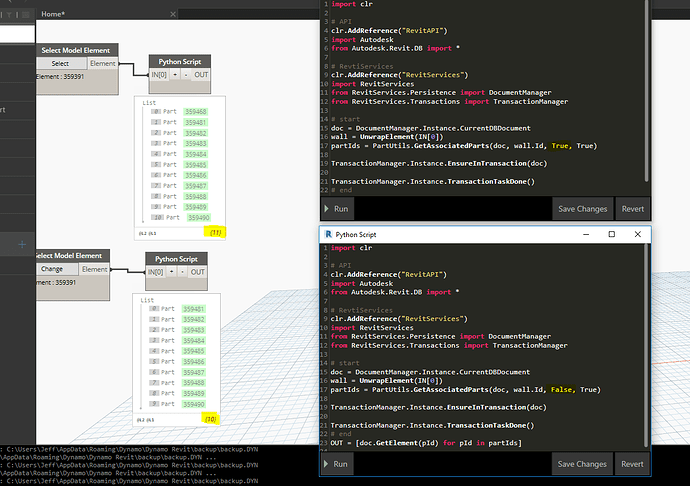 Thanks for the input it’s really really great.
But no matter what method I’m applying, I’m only getting the associated Part OUT, but not the parts I just created. 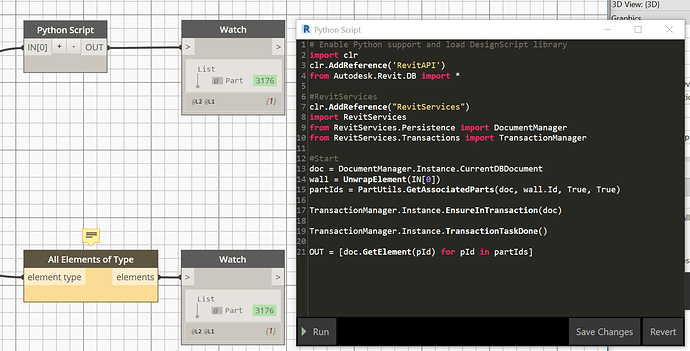 Is it even possible to divide the wall into parts and the select them in the same script??

it’s possible I think, you can just make it happend in the same Python Node, walls get divided first then just use that method to collect the parts from the walls. I need to look through the entire process recently to give a solid answer.

Did you find a way?