I’ve posted this a few years back and no one could actually recreate the surface.

If I’m not wrong all functionality used below was available in Dynamo from the very beginning (they probably work better now). 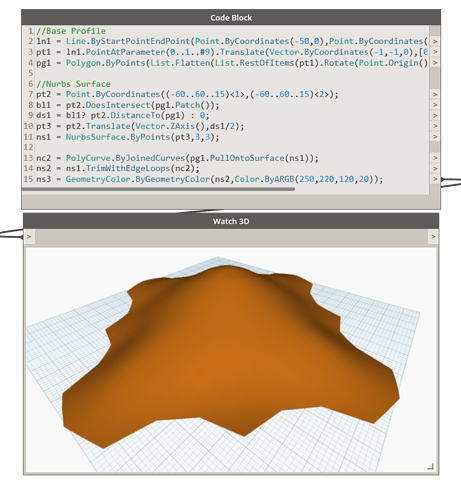 One of the requests we’ve issued a while ago was the need for organic modelling tools. However, someone from the dev. team replied that the FormIt was not intended to have organic modeling capabilities. We would have to use yet another modelling application for that, which in my opinion defeats the purpose of Formit as a conceptual modeling tool.

That being said, please take a look at Shapr3d. It’s initial launch was at the same time as FormIt, and has the same approach as being a conceptual modeling applications for early design available on Ipad as well as desktop, but with the added advantages of being to model organic shapes.

Hopefully, the FormIt team can really focus now on its modelling tools for the coming releases which is the core function

Autodesk made it clear during the Revit Inside the Factory Q&A session that they were not interested in improving (conceptual) modeling tools as they do with their other products. Their focus is on linking and importing geometry from other software within Revit. So while on the one hand, their philosophy in the product en manufacturing industry is to create tools that can get you from concept design all the way to fabrication in one software package in the AEC segment it is pretty much mandatory to use multiple tools to get work done.

Nothing wrong with that. But the irony though is that we pretty much do everything in Rhino. All our facades go from concept straight to fabrication. Revit, which is the most expensive piece of software at the office is used solely for coordination and to draft up toilet partitions and other straightforward guts of the buildings. Even stairs we find ourselves using Rhino and going straight to fabrication. It isn’t possible in Revit to create beveled ridges for precast stairs for instances.

Autodesk made it clear during the Revit Inside the Factory Q&A session that they were not interested in improving (conceptual) modeling tools as they do with their other products.

Were you referring to this question from the Q&A session yesterday, or something else?

Quoting Harlan Brumm’s response as best I can retype it on the fly:

“We really do think it’s important to think about early stage design, and early stage development… Part of our roadmap is also about how do we improve modeling overall in Revit, so there is definitely some corollaries, but a lot of what we’re doing is about how we connect better…”

I don’t personally read that as any different than the manufacturing space where one tool can (rarely) serve end to end processes. Zach Kron then went on to say (again pardon any mistyping - doing my best to transcribe word for word):

“…For the early stage design, one of the things we are looking at is how we can get into a light on your feet, quickly response way to make decisions and move it into detailed design… That’s a shout out to some of the functionality for 2022 which is the direct connection to FormIt from Revit…”

Nothing there says ‘we are not interested in that’ to me. Were you seeing something else?

I don’t personally read that as any different than the manufacturing space where one tool can (rarely) serve end to end processes.

I do not think most of us are necessarily seeking a tool that does it all. However, I do think it is important to at least not be restricted in representing the very thing that needs to be coordinated and documented. Zach Kron elaborated on this point which is often misunderstood. On the one hand, you want unrestrictive fast, and easy modeling tools for conceptual design. Further down the line, you need advanced modeling tools to accurately design and document in more detail. Tools that are needed to execute both phases in an efficient and pleasant manner within Revit are lacking IMHO.

Looking at the early stages of design, the idea to create a separate all-purpose modular that links directly into Revit aren’t a bad idea at all. (However, If I was Autodesk I would have gone the Graphisoft route which implemented over 60 new modeling tools and modifiers similar to 3ds max within one release cycle of ArchiCAD.) As stated in a recent FormIt Roadmap video, the goal is to be the go-to program for early-stage design and computation. We all can agree that Rhino is probably the best all-purpose modeler used by most of us for design on the market right now as well as Grasshopper for computational design. So how does Autodesk plan to make FormIt a go-to program if its roadmap does not show any expansion of its modeling tools?

On the other side of the spectrum, the lack of advanced modeling tools for more detailed design within Revit is also a big issue. The argument that the average architect does not need subdivision surface modeling tools because he is more likely to designs square boxes is debatable but not relevant in this conversation. But if even if you use that as an argument, people still experience major pains when creating a standard of the shelf railings and stairs.

So how does Autodesk plan to make FormIt a go-to program if its roadmap does not show any expansion of its modeling tools?

I still don’t see where you are hearing this…

Check out this video. The exact quotes are at 18:17 minutes.

That’s the quote around ‘wanting to be the replacement… I was looking for where you were hearing ‘no more modeling tools’. Note that the there is indication of ‘we know there is more modeling tools and features that we can provide our customers, and we are always watching the FormIt forum and the FormIt ideas page for popular wishlist items.’

Said another way: if a significant number of users ask for modeling tool X, there is a good chance of it being implemented.

Said another way: if a significant number of users ask for modeling tool X, there is a good chance of it being implemented.

That is exactly my concern that I’ve expressed in my original post. Revit was originally made for engineers and therefore predominantly used by engineers. Architects, on the other hand, use tools like Rhino and Sketchup (35 million SketchUp users to be exact). Given that architects are creatures of habit, it would take an astronomical shift in designers’ preferences to start using a FormIt which has fewer modeling tools and features compared to Rhino and SketchUp. So the very few that already using Formit are also the ones that submit requests on the FormIt Ideas forum. Looking at the top 30 votes, one can only conclude that the requests come from users who never used SketchUp and Rhino. There are no requests for the expansion of modeling tools.

Not sure why you think Revit is specifically designed for engineers. It always has and always will be primarily for documenting buildings with data rich parametric components - yeah, in its earliest days it was more engineering focused, but for almost 20 years since autodesk acquired it they made it for all of AEC… A being for Architecture.

Architects use other tools because they want a more creative modelling environment in conceptual stages to optioneer and realise their design. This is not Revit, and why should revit be this when there are tools already made for this. It would be a silly venture for autodesk to spend huge amounts of money (and I mean a serious amount of money and resource) making their product like other existing products. It would be much smarter to make the integrations between other modelling tools better. This is good for everyone else too, it stops a complete monopoly happening where other tools can still compete in the same space and allows autodesk to keep their focus on core features Revit needs rather than satisfying consumer demand for things that already exist. Win win.

Just because architecture has become and is continuing to be more experimental, it shouldn’t detract from Revits core purpose, which is still serves well, that is to be a data rich parametric componentized building document.

There are two major distinctions here. Easy conceptual modeling tools which usually have a push/pull capability built like SketchUp and traditional surface and solid modeling tools which are created through extrusions, loft, sweep, bevel, patch, booleans, etc. operations. While having conceptual modeling tools within the Revit would be a big plus comparable to Archicad, Vectorworks, AECOsim to name a few, I’m advocating more for the expansion of traditional methods of creating geometry. There is no difference between sketching a 2d profile and extruding it in Rhino, Revit, Inventor, or even AutoCAD. However, Revit has the absolute bare minimum of the most basic modeling tools in the family editor (extrude, revolve, sweep, blend, swept blend). How disastrous would it be to have a few extra solid and surface modeling tools in the family editor? Or is expected that an architect creates all the façade ornaments of historical buildings in a different software? Is it expected that an MEP guy creates toilet bowl content in a different applications? Is it expected that an interior designers creates all the interior content in a different software because because the lack of modeling tools and Revit core purpose is for documentation? This doesn’t make any sense.

By the same argument, one can also debate if the makers of ArchiCAD, Vectorworks, Bentley are all not very smart for implementing more modeling tools that enable the create building elements in the same software without having to be fully dependent on other applications.

Inventor (or Fusion 360 for that matter) core purpose is also to be a data-rich parametric componentized mechanical documentation software. However, to tie data into the components Investor has an arsenal of parametric, direct, freeform, and rules-based design capabilities. I guess that is not very smart either for Autodesk I use the same argument.

This is way off the rails… The development team indicated that increased modeling tools is on the roadmap in the video above, and you you’re in the Dynamo forum complaining about Revit tools, parroting the same statements around ‘Revit should be other software‘ to a group which can’t do anything about that.

If you want to advocate for these tools, I suggest you go through channels where advocating can be done. Right now you are effectively in the motorcycle enthusiasts club saying that cars should have a different suspension.

Head over to the Revit Ideas board and make a post for each modeling tool with information around the business case and user impact.