Some questions to better understand the different versions of Dynamo.

Why is Dynamo Studio stuck at Dynamo Core 1.3?
Does this mean it is end of life since it does not use core 2.X?
Because it is weird that it doesnt seem to benefit from 2.X improvements?

The Dynamo About says “Up-to-date”, this isnt the case.
Is this by design or a bug? 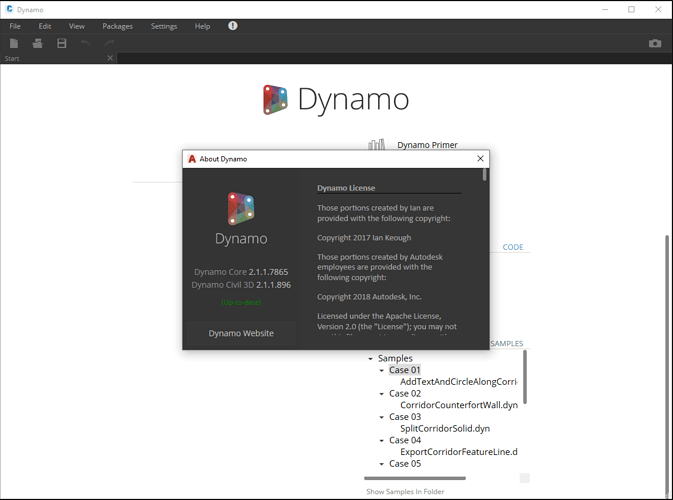 Yes to the above. @solamour can probably answer the rest.

Hello @Raymarcher - A few answers below!

The short answer is yes.

The long answer is - Dynamo is released at a Core level faster than host software can integrate (i.e. Civil 3d or Revit). This is by design as we can remedy any glaring bugs before it gets into the host software

Inside of this are the host release cycles, where once per year they all align (The big push for yearly software) and typically all have the same Dynamo version, and then outside of that big push the host integrators will release point releases (i.e. Revit 2021.1) and those are not necessarily synchronous. Thus, it is possible to be working in both Revit and Civil 3d at the same time, on the latest software, but be in different official versions of Dynamo. Never fear though - because beyond new feature content in newer versions, a Dynamo 2.X graph is backwards compatible with any other Dynamo 2.X (Noting that future features, such as new node additions, will error out in earlier versions where they don’t exist).

Why is Dynamo Studio stuck at Dynamo Core 1.3?
Does this mean it is end of life since it does not use core 2.X?

Dynamo Studio is an expression of Dynamo Core with a few additions. We made a conscious choice to invest deeper into our host integrators to improve that experience instead of a Dynamo Studio a while back, and also now release Sandbox that covers 90%+ of what Studio can do for free.

Dynamo Core refers to the core technology - which is expressed as Dynamo Sandbox. So any user of Dynamo across any host integrator, in the same release version, will have access to all the same core functionality. This comes from Dynamo Core. They also then get their own host expression - i.e. content that directly works with the API’s of the host product. Think the Revit API nodes to build walls, floors, place families, query parameters etc. Only Revit has these nodes as they only make sense in the context of Revit.

The Dynamo About says “Up-to-date”, this isnt the case. Is this by design or a bug?

This message refers to you being on the most up-to-date version of Dynamo for your host at this point in time. This means that there isn’t another Dynamo version that you can upgrade to in that host right now. What it doesn’t mean is that there are not newer versions of Dynamo Core (Sandbox) out there.

Hopefully that helps a bit!

Interesting read, thanks for the through answer