i’m trying to check if a list of vectors is parallel to a list of planes, checking every vector for every plane, but it insist in making the shortest lace 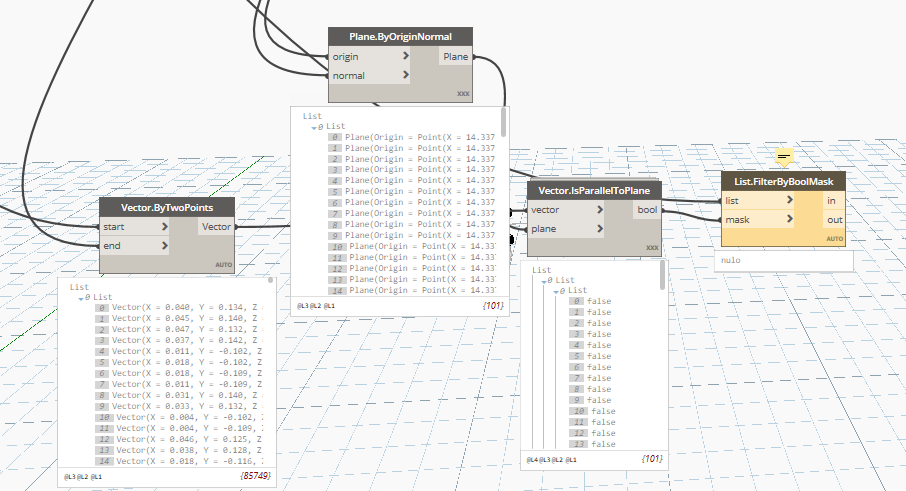 anyone knows what is happening?

–I tried making my Vector.ByTwoPoints a cross product, and when I do it, the Vector.IsParallelToPlane make a long lace (giving me 85749 booleans), but it never make the full check, that would be number of planes * 85749 (number of vectors)–

Hi, that node is a Custom Node, so i think the person that made that node didnt have cross lacing support in mind when making it, maybe you can recreate that node

Ohhh, i thought it was OOTB, don’t know how i missed it was custom lol, must be out of caffeine. I’m going to look at it

I’m trying to get all points that compose a mesh (that i made from a pointcloud) in a certain plane, and i’m getting the vector that goes from the centroid to all other points i have, and this is where i filter all of those vectors to just the ones in my plane (a range of planes in this case, so i can get at least a perimeter [when i use only one plane, i get only one answer at a time, don’t know if that is because of the node or because i REALLY have only one point and, consequently, one vector at that plane] )

check if a list of vectors is parallel to a list of planes, checking every vector for every plane

Check if this works for you …

Thanks for the info! i’ve solved it, inside the custom node, there was another custom node with a structure very close to yours, but the vector.dot inside it was bugged and wouldn’t crosslace, replacing it with exactly the same node solved the problem!

my reply should went to you, missclicked it, but thanks! Yours works great too

Ok, i’m using A LOT of ram to check this boolean (8M+ booleans), and it’s really time consuming RN, and i feel it’s being limitated by revit single threadness (cpu usage won’t go up from 13%), and it’s using 20GB of ram, almost 20% of all my ram… Any idea on how to optimize this?

Ok, i tried using yours to test now, and again the Vector.Dot is not making a crossproduct… any ideas?

EDIT – When i flatten my list, it does make a crossproduct, but it still don’t find any vector parallel, and if i deconstruct the plane list and go with a single plane, it always give me one and only one vector… even with levels it doesn’t seen to work the intended way

Every plane also has a vector, maybe you could extract those vectors and then check if they are parallel?

Also try changing list levels of the vector.dot node if the crosslacing does not work the way you want/ expect it to

Hmmm, this is the way i’m trying now, i’m taking the vector normal to that plane, and checking all my vectors for a dot product = 0… I guess the workflow is right, but i can’t execute it in dynamo, i will keep trying

i tried using yours to test now, and again the Vector.Dot is not making a crossproduct

Some alterations to Lacing and Levels are probably required. Try this …

When i flatten my list, it does make a crossproduct, but it still don’t find any vector parallel

There was an error, have updated my earlier post with the rectified file