Select Point on Face not working in Dynamo Player

Last week I prepared a rather simple script to create dimensions on selected grids, using a selected point in Revit window to create line needed to place the dimension. Script runs well in Dynamo editor, but when I decided to prepare this sript to use with Dynamo Player - bummer. Script returns a warning, dimensions are placed as if there was no line to create the dimension.
I’ve done some testing and the node “Select Point on Face” is the culprit. I can use “Select Point on Element” form Genius Loci package, but when it comes to Dynamo Player workflow and setting the inputs, it is not what I’m looking for here.
Do you know, what can be done to revive the OOTB node?

Hi Alien,
I tried that folk too. I was hoping I could stick to one environment, to have everything boing picked from Dynamo Player. However, thank you for the answer!

Have you set it as an input?

Sure. It is available from the Dynamo Player itself, but it doesn’t pick the point into the script.

this is really awkward since it is an OOTB node.
you would expect that to work.

but when ran from Dynamo Player as an input: nothing.
placed a watch node - it sees nothing. 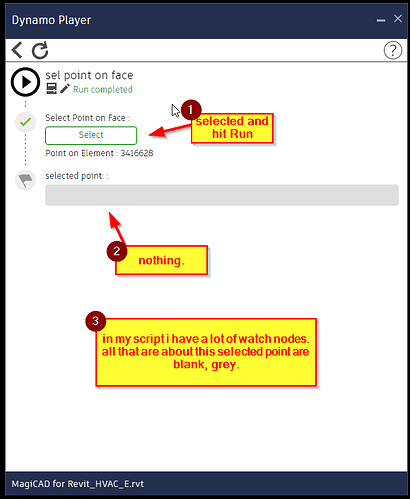