Python for Dynamo; error for loop: index out of range

Hi, I am kind of a noob of Python, but I am using Python to build a node in Dynamo for Civil 3D, and I’m facing some problems with the following loop, giving me the error “Traceback (most recent call last): File “”, line 16, in IndexError: index out of range: 0”

The script should build a new list (Packs_Indexes) putting the elements (lists themselves: Packs_A, Packs_B, Packs_C_D) at the index i consequently to a condition.

I also tried with

In this case, I don’t have the same problem, but the calculation goes on for hours and then eventually the software crash.

What am I doing wrong?

Thanks to whoever will help me out!

Strategy is a list of 1 dimension, as well as Packs_A and Packs_B while Packs_C_D is a lists of 2 dimensions.

for i in range(0, len(TotStrategies)):

done and sadly it doesn’t help… I also tried with a “while” loop, or specifying the step in the for loop. I have the idea that maybe the problem is in the deepness of the lists (vectors and matrix, basically), but it shold work nicely as it did in other script I used before

Can you provide the list structures / images of the graph with node preview so we can better understand what the data looks like?

Oh, I’m sorry, I misunderstood, I thought you meant len(Strategy), that is the vector of strategies, while TotStrategies is an int. I’ll post the pics of the graph as you asked 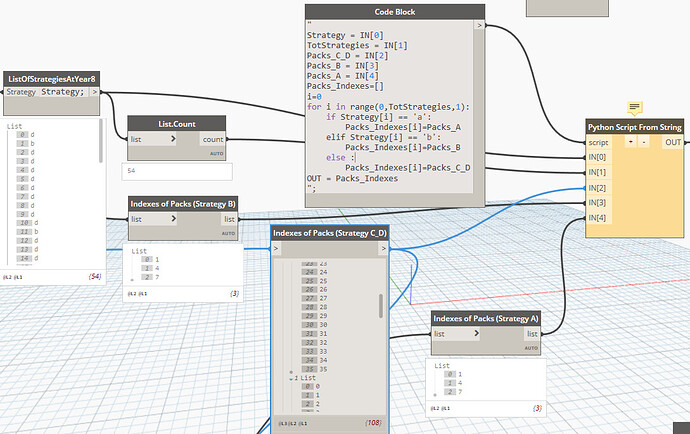 OK, starting problem solved… that’s basically why when I use “append” it doesn’t give me any error, but on the other hand the software crashes after few minutes it’s running. I hope it is not an hardware problem (and anyway I also tried to use a virtual memory to bust the ram).

Do you read and write to the same Excel file?

so it’s an infinite loop, don’t do that.

The Dynamo file is an infinite loop:

Again, thank you so much for your kind reply;
I wasn’t clear before: the Dynamo file doesn’t write on any excel file (I didn’t arrive at that point yet, and I’ll write on a different excel file).

Eventually, it was a hardware problem. The script was correct, but the amount of calculations was too much for my 8 gb RAM, it needed a 64gbRam workstation to run successfully…

Thanks to everybody for your replyes!