Im in the middle of building a script, and i want it to be used via dynamo player.
I want the user to input numbers, but i want dynamo to read it as a list (because i want to be able to count it and do some list analysis on it) is that possible?

P.S.: this list will be input in the next node as a double, if that helps

It would have to be a string input that you parse in Dynamo and separate into list items. You can do this pretty easily with String.Split.

If the increments are allways the same. 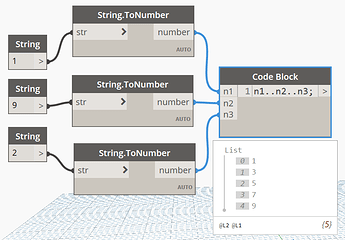 Nicks solution is better if the input is a bunch of random numbers.