I’ve tried two major nodes separately to find the best solution for me, which is Surface.BySweep and Solid.byLoft.

First, With the Surface.BySweep.
The 3d polyline that I want to use as a path is too long for Dynamo to operate Surface(or Solid).BySweep. To resolve that issue, I used PolyCurve.Curves to get a list of curves of the polyline. but the final surface has gaps where the curve bends.I want to have one closed (watertight-mesh-like) pipe.

so I changed the direction of the approach to Solid.ByLoft.
The problem with this node is that I cannot use the polyline from CAD. I have to convert the polyline to a nurbscurve to use it as a guideline for crosssections. That makes the solid has different elevations from the CAD polyline elevations. 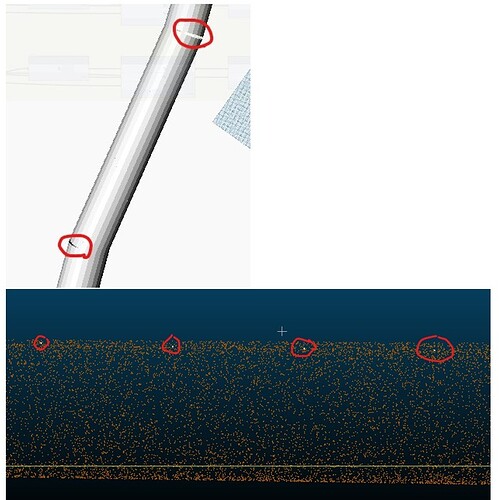 Is there a way to get a cylinder in Dynamo that is like the one I get using Civil 3D(AutoCAD)?
I want to make this step scripted for the future workflow .

Not an expert but is it possible to add a really small ARC in between change/Bend Pipes ?

you can use arc as a pipe and it will transit smooth.

That’s worth of trying. Thanks

I’ve tried a new method that was inspired by your idea.

I’ve created points in the middle of the polyline, and then created curves to included the bending area with the middle points as ends of the curves.

image165×570 12.7 KB
The red dots are the middle points between vertexes. The yellow is the new curves including the bending areas.

Sweeping along the new curves solved the gap issues. Now I have a water-tight cylinder!