For some reason the Curve.Offset function in Dynamo/DesignScript does not produce consistent results relative to curve direction. As an example, try drawing lines from the center of a circle to even divisions around that circle - then offset those curves. You’d expect a radially symmetrical figure, but instead it “flips” at a certain point. compare the results between GH and dynamo: 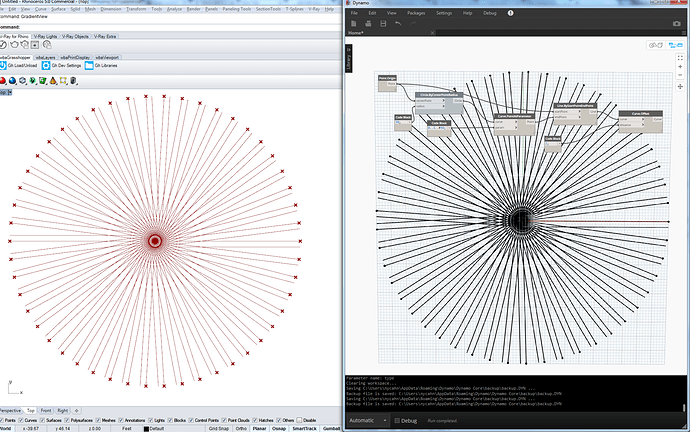 I thought this behavior was being triggered by the normal flip. But all are the same.

This node always bothered me.

In this case the results are consistent, but unwanted.

@Andrew_Heumann thanks for pointing it out. This is a bug, we’ll fix it.

When will it be fixed? Curve.Offset is still buggy.

But it is very weird that some lines offset to the wrong side.

@Anton_Huizinga this was fixed in the 2.10 release. If you’re still seeing issues, could you share the Dynamo graph for us to investigate this further?

I added a startpoint node to the offsets so you can see the direction is correct, they are not reversed.

If you fix the offset bug, can you also fix the split bug? Sometimes the last part of a curve is lost after a split. As a workaround I add the endpoint of the curve, as described here:

BUG: Split curve with parameter or with points removes curves from polycurve + work around Geometry

As the title says split curve with parameter or with points removes curve segments from polycurve that are not used from the end. I have been working though workarounds to fix this bug for almost an hour or so including matching curve directions, before i make the polycurve, the works. Until i searched in the Git hub page and found it an old bug that will has again not been fixed but has been closed as for some crazy reason geometry bugs are not on the roadmap it seems. The Answer / Workaround! …

Thanks @Anton_Huizinga for providing the files to reproduce the issue and for bringing it to our attention. We’ve tracked this internally for now and I’ll let you know if we need any more information from you.

The Split bug for polycurves will hopefully be fixed soon. We are working on overall improvements to Dynamo polycurves as a bigger project.

That would be great!

The offset is made in Curve.Normal direction. Whats make sense for me.

Dynamo geometry doesn’t know what is “right” or “left” direction.

One simple approche to solve this is offset curves in both directions and establish some creteria to choose the “correct” side. For instance, using a point on the correct side and filter curves that are more close to it.

The offset is made in Curve.Normal direction. Whats make sense for me.

The offset accepts a negative value to offset to left and positive to right. The PolyCurve direction is the same for all segments. So it is obviously a bug when some PolyCurves are on the wrong side. If you see the screenshot the first and last segment have the same normal but still they are on opposite sides.

One simple approche to solve this

Sure we can find workarounds for all bugs, but I would appreciate a fix.

@Anton_Huizinga to fix this we have introduced a new Offset node that takes an additional normal input that defaults to the 2D curve’s plane normal (we support offsets for only 2D curves). This default normal can be overridden using a user-supplied normal that is parallel to the curve’s plane normal, either facing the same direction as the plane normal or facing the opposite direction. The normal direction will control the offset direction of the curve(s). It is especially useful to supply a user input normal in your workflow so that you can have all the split curves offset in a consistent direction as long as they share the same plane.

Note that this node will be available in a future release of Dynamo, 2.15 or higher.

Great, thanks! I look forward to the new version and will test it as soon as possible!

This has been a frustrating issue for quite awhile, so it’s great to hear about a true solution that isn’t another workaround. Thanks for the fix @Aparajit_Pratap, and thanks for following it through @Anton_Huizinga!