Hello. I am trying to create a rectangle at the thresholds of doors. My script selects all doors into a room and creates points at each corner of the threshold. So I have a list of lists of these points.
Dynamo dot-to-dot question|635x499

Now the question is how to form a rectangle from each series of (4) points which can then define a surface. As the number of doors into a given room varies, the number of indices in the list of lists varies.
Any help is greatly appreciated !

Try feeding your groups of points into the

_Sort Points as Perimeter node from the Sastrugi package.
This node takes a list of unsorted Points and orders them (clockwise/anti-clockwise around a centroid) to create a Perimeter. Useful for creating Polycurves and Surfaces.

Thanks Ewan. That node seems to add more depth to my list of indexes rather than less.
So I’m trying to use the “Surface.ByPerimeterPoints” node to generate the surface and I get a “Points are coincident” error. I’m basically trying to do exactly what is in this thread : Get windows and door coordination and I’m stuck at the part where the guy says " OK, now I have a closed polycurve." I can’t get that polycurve or anything resembling it.

Can you post a screenshot of your current dyn? The link up above isn’t working for me. 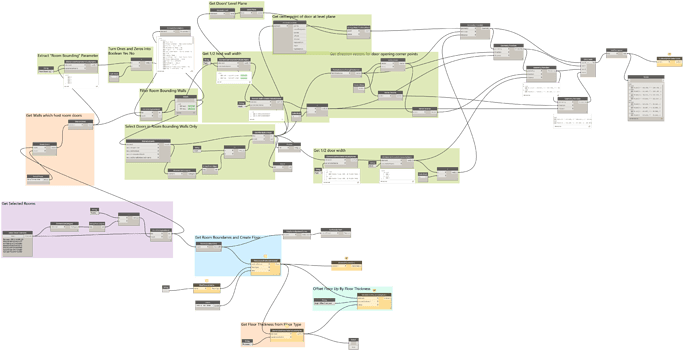 DoorNFloors.png5458×2808 960 KB
Here’s the whole dyn.
The final “surface.byperimeterpoints” is giving me a “points are coincident” error. I can’t find another way to get the door thresholds as a surface. The idea is to add those surfaces to the overall floor.
Ewan_Opie December 28, 2017, 12:11am #6

Looks like you need a list.map with a flatten function or a Transpose node (or both) on the last output before trying to make the surface, so you have groups of 4 points in each list item. Then if points are still coincident check what is removed when a Prune.Duplicates node is used?

Happy New Year Ewan ! I only just got back into it and tried your suggestion and you nailed it ! I need to clean up some of my room boundaries now cos it looks like I get errors when transitioning from walls to “room separator lines” but I am getting surfaces !