I’m trying to make a python node run after the previous one has completed. What is the best way to accomplish this? 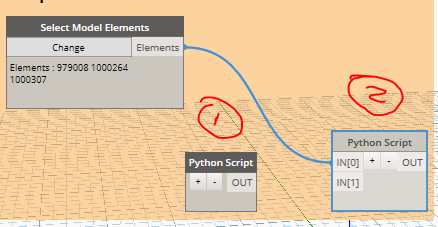 Thank you in advance!

Theoretically you could also just connect your first node to the second, but I think I’ve had some issues with correct sequencing in the past using that method.

I suppose that in your case the 2nd Python node inputs are not the outputs of the 1st, right?

Usually I use Orchid node Data.Await, for example when you have an element, you want to do something with it and then delete it. In a normal case it might be deleted before the other task is completed, causing the graph to fail.
With this node the 2nd node starts to work only when the 1st is over.

Good idea! I think this would work in most cases.

Unfortunately, in my specific case at the moment this solution is not working. It must be the methods I am using (post command & selection.setelementids)

I have tweaked it this way so it can be processed the number of times you want it to by adding more purge nodes.

Correct, this is a well-known issue… There is some problem in getting access to what can be purged. Therefore does the default value not include “materials”, for including this you need to add “true” value Document.Purge. This is written in the help for the node. But still it need to respect certain things due to the RevitAPI. However, there is another purge node called PostCommand.Purge, this one will purge you document, but it must be used in a very specific way. This node do what you can do …

Do you have any experience to subscribing to Revit API events in Iron Python? I’m trying to subscribe to the Idling Event under UIApplication Class. Here is some documentation:

And here is my code. I’m pretty sure I’m close to the solution but can’t seem to get it figured out.

Thanks for any help in advance!

I work in .Net for everything else than quick fixes which I from time to time do in Python.

Do you think you could take a quick look at what I’m trying to accomplish above?

It seems that subscribing to an event should be a basic task, but I’m really struggling with subscribing to a .Net event in Python. I would greatly appreciate if you could give me your input since you are a much more experienced user!

As a side question:
When you say you work in .Net for everything does this mean you are running your script through macros? And if so, is this a more valuable, efficient way to run scripts for Revit?

My entire package is a ZeroTouch package coded in C#. You can do much more with C# than you can do with IronPython 2.7.3.

If you want to start coding in .Net then go to this page for a start
https://developer.dynamobim.org

@ericabbott The answer to your question is that you cannot subscribe to the Revit events from Dynamo. Dynamo itself uses the Idling Event to submit its calls to Revit DB.

If you wish to switch tools then one possibility is a tool called pyRevit. Here’s an example of how you can subscribe to events from pyRevit: https://github.com/eirannejad/pyRevit/issues/201

You can also subscribe to them using ExternalApplication if you write Revit Addins. That would require switching from Python to C# or VB.