hello, if I have a list of lists, sometimes I have multiple elements in those sublists. If the sublists are identical, I want to be able to select the next incremental number or next index value of each sublist and discard the rest. But at the same time keeping the sublists that have only one valuse. See below for a what i mean. Thanks 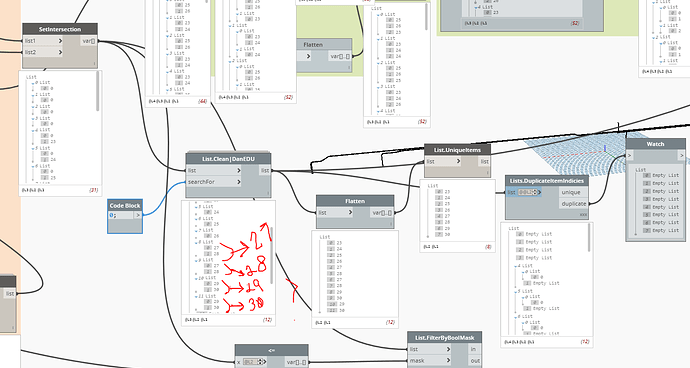 If I am understanding you correctly will this work?

The last part can be found from this post. (I sent it to you earlier today in a different post)

Insert Item to end of list at index Lists-Logic

No because I have to use the existing numbers from each sublist. I was able to get close. This solution actually works for my current selection but fails if I have more than two numbers in each sublist. See below. I utilized the deconstruct list node, to chop away the numbers I use in each sublist. but I was hoping to find some way to count the occurrences of each sublist (entire sublist) but failed miserably. My thought was to use the count of each sublist to set up some sort of loop or repeat a number of times function.

@mix - if that doesn’t work please upload a small dyn data set that indicates what you have in a list, and a second list (manually typed) showing the desired result.

Alright guys, I am not sure what either of you are trying to do, but I wrote it out so I could see it. Below is what I got. I dont understand the purpose of putting a dash between 2 numbers, nor do I understand what the index of is supposed to grab. I am trying to eliminated a number after the first time it shows up in the list. the second picture is of the action that I want, but its limited to there only being 3 numbers in each sublist. so at least you should be able to see what I am trying to do. Thanks so much for your help.

@Nick_Boyts, yes exactly like that. Let me test it out for all occurrences…

@mix - if that doesn’t work please upload a small dyn data set that indicates what you have in a list, and a second list (manually typed) showing the desired result.

If you want good help, post the dyn I requested above. We don’t need rvt files nor Revit interaction content, but we need a clear starting point and end goal to work towards, which you can create directly in Dynamo. Doing so will often help you resolve the problem effectively.

Hello, Here you go, This is what I am trying to get. But I keep failing.