CreateProjectParameters not longer working in Dynamo for Revit 2023

I’ve got multiple dyn’s that use the buildin Create Project Parameters node, but they stopped working after upgrading to Revit 2023.

The error message says that the input types aren’t valid, which is strange as they were accepted before, but probably would not be a dealbreaker if I would be able to generate objects of the types that are asked for: “Revit.Elements.GrouptType” and “Revit.Elements.SpecType”, which I wouldn’t know how to achieve.

Any clues? Thanks in advance!

The error explains what’s going on. The specType input requires a Revit.Elements.SpecType object and you gave it a string. I believe it worked before because specType wasn’t an input. Use a selection from the Spec Types node instead.

As an added FYI, if you hover over a node input it will give a brief description and the required input type (if there is one). 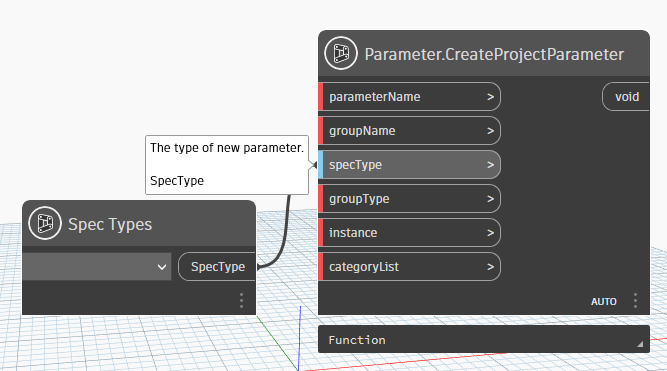 I was aware of that but I didn’t know of a way to construct an object with the right type. Turns out that there was just a “spec type” node, me so stupid…

Anyway, thanks a lot! It works now

@Nick_Boyts Do you know if there is a way to specify the SpecType using design script in a codeblock? I hate using the selectors as you have to babysit them every year just in case Autodesk adds a new type and it bumps yours down an index.

I don’t know off the top of my head but you can always use Node to Code to find out. I’ll also mention that built-in selectors are now ID-ed rather than indexed, so you should be able to safely select the value you want and not worry about it changing.

@Nick_Boyts I attempted to use node to code yesterday but couldn’t find it in the new version of Dynamo (probably user error). I will check again. Thanks!

Make sure you have the nodes selected and you right-click on the canvas to pull up the Node to Code option.

For whatever reason Node to Code does not seem to work for the Select Parameter Type node.

That’s usually a strong indicator that the node doesn’t have a DesignScript equivalent. You can always use the API to specify the SpecType, or, as I mentioned earlier, you can go back to the dropdown and shouldn’t have any trouble.