For many users in Denmark could this be a “must read” post!

I have made two nodes that now are part of the “DanEDU Dynamo” package. These two nodes can be used for transferring data from Revit to Sigma.

Sigma.WriteData node is the essential node, it is this node that writes the data to the Sigma file format. The format for sending data is as list of two lists. List [0] contains the structure as strings {“number”,“text”}, List [1] takes components as variables {element, unit, quantity, regulation}. Note units in the example is according to the Danish “V&S Price data books”! 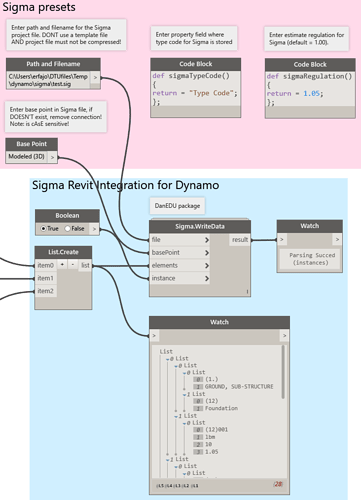 Sigma.Summarize is a node that can take one set of data and summarize them before sending them to the Sigma.WriteData node. Please note that Sigma.WriteData is able to send all data as instances or summarized (the Boolean option)! 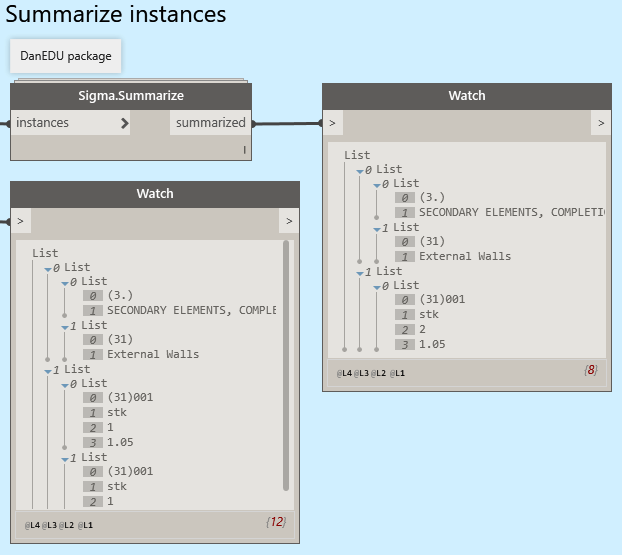 Note:
It is very important that the Sigma project file is not compressed, the file format is essentially an xml file format, but in a compressed version is it not possible to write to the file!

Screen dump from Sigma when data is transferred and prices are updated from project library. Prices are in DKK. (€ 0.1345) and price tag labels are in Danish… 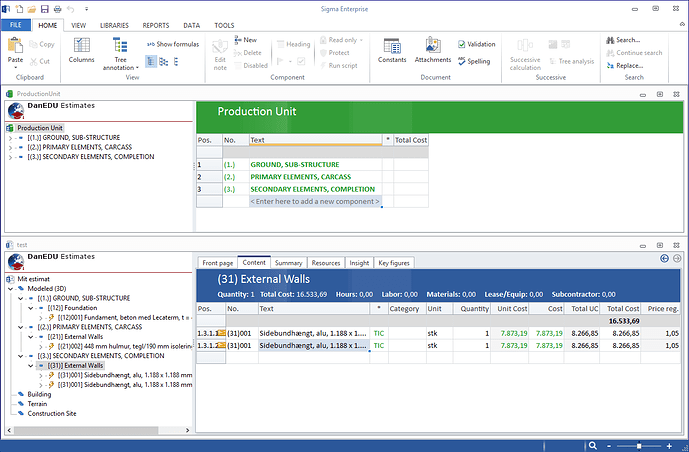 This looks like something that our users in Denmark would find useful. I pinned this to top of the page for a week. Thanks for sharing!

Thanks to feedback I got, I have implemented some good ideas. That means that the Sigma nodes is heavily updated.

The nodes is now passing the RevitId to the sigma file. This gives the opportunity to check the file for existing objects, meaning the node now only add new objects and update existing objects. This is doable for both transferring objects as summarized and as instances. Additionally an option for ‘clearing’ the sigma file for data transferred from Revit is added. However, this require that a ‘component root’ is given for Revit modeled data, otherwise would the entire file be cleaned including manually added components. The ‘clearing’ option is needed when objects is being deleted in the model, then it might need to be cleared in the Sigma file as well. It is handed to the used to make this decision.

The error log is substantial extended, which will assist the user correcting errors. Furthermore is defaults set where it makes sense. Please verify the below image of the example graph

All Sigma nodes have totally been re-coded for supporting “live” connection instead of being dependent on Sigma files been created and saved --> then work being performed in Dynamo --> then back again in Sigma doing what needs to be done --> reversing to Dynamo… and so on. All this is history now.