I’m trying to override dimension values. But I wonder if this is (at all) possible with Dynamo.

As Revit doesn’t allow you to do this OOTB - Dynamo won’t be able to facilitate this either.

You can override dimensions if you write a Python Script. Edit as needed…

Why would you want to do this though??

I have no clue what the OP needs it for (interestingly via Google Translate “Verkoop” means "Sales…maybe its for some sort of leasing layout…), but I can see some uses.

For instance - there is not a “Tag” type that behaves like a dimension, but I might want to have some tag that looks like a dimension. Using this overriding capability paired with the ability to detect what elements are the references of the dimension (using Dimension.ReferenceArray), I could (in theory) dimension between two beams (with a bunch of similar beams all in-between them), read the two dimension references, compare and verify that both are the same type of beam, then write the “Type Name” into the Dimension Override. Voila - a “tagged” dimension (kind-of). If I had on particular dimension type that i used for all “tagged” dimensions, then i could batch update all of them with one small Dynamo Routine right before a print set goes out.

(But I agree - overriding dimensions is a slippery slope…)

@Ben_Osborne is there a way to get the python code to override the dimension on a continuous string of dimensions? (a bunch of dimensions placed at the same time)?

I want to add (REF) to the Text Below Filed of any or all dimensions that I pick. It is an (old) office standard. All bay to bay (column line to column line) dimensions are to be labeled as (REF).

I recently added some DIM nodes to Rhythm.

Tom-
The Python Script you need (if you don’t want to use Rhythm Nodes) is in the earlier post (just look at the pic and type it in).

You could also bypass the manual selection of dimensions by accessing the References of the dimensions, testing if both references are Grids, then adding the desired “Below” text only when the dimension passes your grid reference test. So this would allow you to run the script on the entire project and correct all dimensions at once to match your standard (see attached) 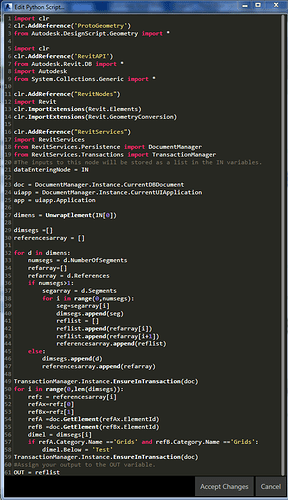 wow. thanks. not sure if i would want it to run for the entire project. The Rhythm package got me what I was looking for. Thanks for the reply.

I cannot seem to find your dimension.multisegmentmembers node to recreate this script, has it been substituted with another node?

I want to overide the text underneath the dimension as per Toms post.

Hello @Kieran_Atherton, if you are willing to try your hand at Python - then I wrote an AU London course around this very topic

The entire document is very helpful, but the Dimension stuff starts at page 45.

To do the bottom values, this node will achieve that.It works with single segment or multi segment 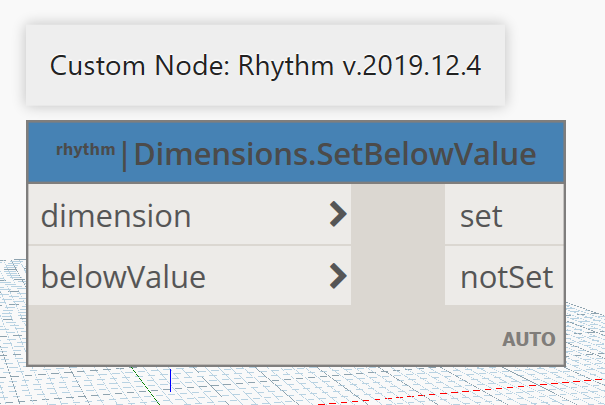 1 Like
Anyone able to override dimension texts for multi-segmented strings/dims?
Kieran_Atherton January 3, 2020, 2:56pm #15

Cheers Sol. I will give that a read this weekend !

Ben, thank you very much,

before I only could find override all dimension segments until I read your thread. I developed a bit base on your script.

Thank you again. attach python script to whoever wants to achieve same. 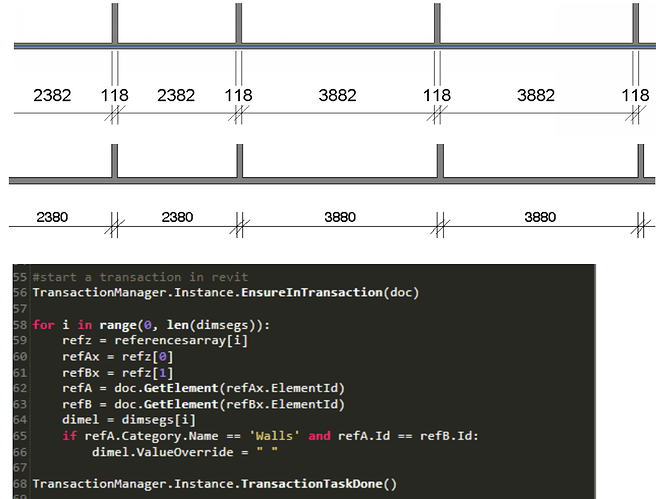 Hello, I was just wondering if anyone else have had issues finding the node Dimension.MultisegmentMembers, even though I have the package Rhythm installed?
BR

multi segment members is no longer needed as Rhythm nodes have logic for handling single segment or multi-segment.

Thank you for letting me know!